A shadow and a threat 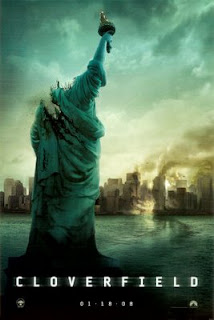 Partly because the cinema in Bedford is rubbish, and partly because I’m such a procrastinator, I didn’t get to see half the films I wanted to this year, so I’m not going to do a list of 2008’s best movies. As I was thinking about some of the films I’d watched though, I found myself recognising a recurring theme: the presence of evil. Not simply 'bad guys', but inexplicable, nonnegotiable evil. Here are the three films I’ll make my case with…

Cloverfield
Of course monster/disaster movies are nothing new, the only real innovation here was that everything was seen through the eyes of a single camcorder. The point is that this was a seemingly-unprovoked attack on New York by an entity that could not be negotiated with, perfected with the iconic image of the decapitated Statue of Liberty. We learn virtually nothing about the monster, the film is simply about how people react to it.

No country for old men

This unsettling, idiosyncratic film is built around an incredible performance by Javier Bardem as a remorseless hunter. People try to negotiate with him but they have nothing he wants. Anyone who gets in his way just dies, that’s all there is to it. Watching the film you keep asking yourself, ‘Why is he like this?’ and you never receive an answer. The only thing that comes close is the concluding suggestion that the world is evil and it always has been.

Going toe-to-toe with Bardem is Heath Ledger’s Joker. It’s another great piece of acting that leaves you uncomfortable whenever the character is on screen. Again his evil is inexplicable: “Some men,” as Alfred tells Bruce Wayne, “just want to watch the world burn.”

Three characters, all monstrous, all breaking in to ‘our’ world and changing it for the worse. The shadow over all these films, of course, is the wreckage of the Two Towers. Cloverfield is the most explicit given its setting but all three are clearly creative attempts to explore how we deal with the presence of evil in the world, provoked by the 9/11 terror attacks. Cloverfield shows people running from the horror and taking care of those they love, No country… gives us a world-weary sheriff drained of all hope for those he is called to serve, and in The Dark Knight we see Batman attempt to subsume the Joker’s evil (including Harvey Dent’s descent into Two-Face) and by doing so give hope to the city. This is definitely the most fascinating response of the three films but is it a solution to the question of evil?

I think all three responses are part of the human reaction: to run, to despair, and to fight. You will, for example, see evil on the news and respond with a mixture of these three. You may run to another channel/website for entertainment, you may simply sigh with sad resignation and brace yourself for the next item, or you may decide to do something that will attempt to change things. Put thus, option three sounds like the only ‘correct’ choice but if you attempt to fix everything you’ll soon find yourself overwhelmed and drifting towards to despair. This is the point these films are making: the scale of what is wrong is so overwhelming.

Let’s visit another film, The Lord of the Rings. Here again we find implacable evil and the question of what to do. The central character, Frodo, initially desires to run but then decides to fight. Soon, however, he turns to despair, wishing that none of the evil he is enduring had happened. His guide and counsellor Gandalf replies: “So do all who live to see such times, but that is not for them to decide. All we have to decide is what to do with the time that is given us.”

So is this the middle ground, you can’t do everything but you can do something? I once heard a preacher say, “How do you change the world? One person at a time.” This seems to be along the same lines and manages to combine overwhelming odds with personal opportunities. But will this truly change anything or could it seem to be the rearranging of deck-chairs on the sinking Titanic? What is also required is a decisive event, the moment when the tide turns.

And this moment has happened. It was the death and resurrection of Jesus Christ. In that moment Jesus took on all the forces of evil that had been unleashed on the earth by Adam’s disobedience and triumphed over them by His obedience. “[God] disarmed the rulers and authorities and put them to open shame, by triumphing over them in [Jesus]” (Colossians 2:15).

There was the decisive battle won, though the war has continued some while. The source of evil, Satan, is identified being “in great wrath, because he knows that his time is short!” (Revelation 12:12). This explains to us the horrors we still see: both arbitrary and through the deliberate choices of wicked people. Finding ourselves in the midst of this, what are we to do? Surely we should put our trust in the great Victor, Jesus, and then obey Him with faith-fuelled acts of restoration. Here is evil put to flight: many small warriors under one great banner: “Jesus Christ is Lord of all.”

Those who say that the existence of evil in the world persuades them that God cannot exist should perhaps read God’s book. There they will find the clearest description of the evil that so grieves them, and they will also find a message of hope. Hope that comes not from mere human effort but from the victory of the God-man Jesus Christ on the cross. The Bible starts with paradise that is swiftly lost but that is only the beginning. Through the decisive act of the cross, anticipated for thousands of years and being worked out for thousands more, paradise is won and will be restored. More than restored: re-created and superior to all that came before it. In the triumph of the last book, Revelation, Jesus declares, “I am making all things new” (Revelation 21:5) as He brings about the dawning of the new, perfect age. And evil is finished.

To finish by returning to our movies. Whilst Cloverfield and No country… end with little or no hope, The Dark Knight suggests hope may yet be found in the redeemer Batman – he is the decisive event for Gotham City. Written by a Christian, Lord of the Rings ends with hope as the unlikely hero Frodo sees peace come to earth and his own eternity begin: “the grey rain-curtain turned all to silver glass and was rolled back, and he beheld white shores and beyond them a far green country under a swift sunrise.” (Book 6, Chapter 9). We humans recognise both great evil and great good, we long for the one to be defeated by the other but fear it cannot be. We have an innate sense that we have lost perfection because we still clamour for it. This is the story that the Bible tells, only when we turn to the great King Jesus will we find fears defeated and hope triumphant.
Labels: Movies Reflections