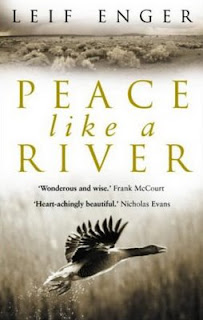 Probably the first thing I need to say about this novel is that I cried towards the end of it. Really cried, maybe even sobbed. This isn’t standard practice for me but then this isn’t really a standard book.

The other thing to get in early (because this is going to be a positive review so let’s get the negativity done with now) is that if you’re considering reading The Shack, please read this instead. It considers a similar theme – suffering – and is superior in every way.

The matter in hand then is the debut novel by Leif Enger, telling the story of a family’s experiences of loss, hope, and faith. I hate plot giveaways of any sort so I won’t describe the story any more. You can, if you wish, find out more here.

A rich tale, one of its key ingredients is faith. I cherish it for this, having generally to receive my written encouragement on this – aside from the many stories in Scripture, of course – in text books rather than creative writing.

Faith is presented as being unassailable because it has been assailed. God has been wrestled with – has allowed Himself to be engaged, please note, with the desire that greater trust in Him would be the fruit. Bad things and good things happen, both in extremes. The question ‘Why?’ is generally not addressed – a thoroughly Biblical response in the light of the conclusion of Job (Job 38-42), and the teachings of Jesus (Luke 13:1-5). What is addressed, again in parallel to Scripture, is how we can endure through such times. Tick-box answers such prayer, honesty, Bible study are weaved in but it is the story itself that is the answer. We endure by enduring. You want faith? Have faith! And it is faith that brings us to God. This is the answer that the afflicted truly want: not an explanation but an encounter with the great Consolation (Romans 15:5, KJV), and perhaps with others who have climbed similarly difficult terrain.

This kind of faith is personified by the father of the family (how wonderful to have a godly father so well and inspiringly described). By assigning the role of narrator to one of the children, Enger allows his readers to consider the father’s faith rather than have it described to them in prescribed detail, which is far more satisfying as a narrative device and a teaching aid. When we then witness this faith in action we can feel either dislocation (as the narrator typically does) or wry kinship, as we recall circumstances and trusting choices of our own.

Distance between narrator and the faith-centre necessarily leads to even greater distance from the faith-object, God Himself, and yet God’s proximity is wisely dealt with by one who seems to understand: “I felt a comfortable strangeness, as if smiled upon by someone behind my back.” Oh, the joy of a well-delivered phrase that describes something you know in a way you could not! That is just one of many instances of delightfully delivered lines… “This was certainly the work of the Lord – the work of providence for you timid ones.” In regards to courting: “Why sprint through such sweet country?” Considering how rarely one hears of asthmatic outlaws: “They exist but rarely excel”. And this hilarious couplet: “Drat, thought dying Lazarus / This part again.” Great lines, great characters, and great truth combined wonderfully.

There is a genre of writing called ‘magic realism’ in which extraordinary events are described as ordinary in a highly realistic style. One could be tempted to ascribe Peace Like A River to that category given its descriptions and expectations of the miraculous. For a Christian though this is wonderfully described realism: life contains hardships and blessings, sometimes both at once. Miracles are found in these pages, it is wonderful to read them described so well. And there is more, “the assurance of things hoped for” (Hebrews 11:1) is described with marvellous power and joy. This sent tears streaming down my cheeks as I was brought, once again, to a realisation of the eternal goodness of God. That is something worth reading about.
Labels: Books Good stuff Reviews Wisdom