This is the second part of my review of the ESV Study Bible, having owned it and used it for the past six months.

Study materials are, of course, what you buy a study Bible for (unless you just want to look a bit more pious at church). I have been really impressed with what is in here.

Introductions
Both testaments have helpful introductory essays, as does each type of writing (i.e. the prophets, letters), and every book also has a thorough introduction.

The books’ introductions contain expected information such as who wrote it, when and why, along with key themes and an outline. Questions of authorship and authenticity are discussed within an evangelical framework. There is a really interesting section called “History of salvation summary”, which fits every book into the big story of salvation. This is a really good touch as it reminds the reader of God’s great plan and Christ’s great achievement in accomplishing it. There are also book-specific sections on key issues, such as “Genesis and science” and the differing mainstream interpretations of Revelation.

Study notes
My concern with study notes is that they make the reader lazy: rather than thinking, praying, and working out what a passage means, you just look for the answer in the notes. To help resist that in myself, I always read a passage without looking at any of the notes, have a think about it, and then go through again but this time looking at the notes. This seems to be a helpful middle ground.

Within the notes there are section and sub-section headings, helping the reader to see a structure in the text beyond the rather arbitrary chapter and verse divisions.

When reading study notes, it’s easy to notice the absence of one’s own theological distinctives. So whereas I think the argument over whether spiritual gifts are for today based on 1 Corinthians 13:10 is presented fairly, and falls (just) on the side I take, it is also argued that there are no apostles today from texts such as 1 Corinthians 15:8, which I would humbly disagree with. To be fair, the notes are honest about uncertainties and controversies within the evangelical viewpoint, often presenting different options to the reader and not always drawing a conclusion.

Elsewhere the notes helpfully point out what might otherwise be missed. I read Hosea 1 assuming that the prophet married a prostitute, but this is apparently not what the text says. Furthermore, it is implied that the second and third children his wife bears are not his – but I had missed this implication until the notes highlighted it. I understood more clearly how Hosea’s marriage mirrored the relationship of God and Israel: it had started well but now the people were being unfaithful.

As you would expect, there is a substantial concordance, and detailed cross-references, both of which help you go on journeys of discovery through Scripture. 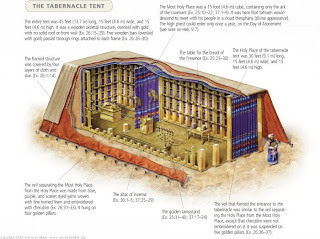 Some people can read a description of something and immediately see in their head what it looks like. I am not one of those people, and so I found the use of colour pictures and maps really helpful. These are particularly good in the Old Testament as tabernacles and temples come to life in full colour. New Testament images are helpful for setting scenes: i.e. what did temple look like when Jesus was there? The illustration of Jerusalem and where Jesus is thought to have been crucified caused me to wonder if He could see the old temple from the cross, something I probably wouldn’t have thought of otherwise.

So the study materials are up to scratch. But what are the really special things that the ESV brings to the party? Tomorrow’s post will explore that.