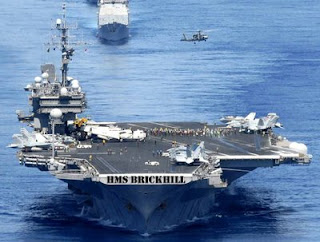 The Bible teaches that God speaks to His people today. He has spoken to all people for all time through His Son and the Bible, and He also speaks to certain people at certain times through prophetic words that His Spirit gives to people. These gifts will continue to be given as God builds His church until Jesus returns on the day of judgement.
At Brickhill we have been working through some exciting things that God has been saying to us over the past few months. In the spring of last year, a member of our church had a dream which she described as follows:

I saw a huge cruise liner – so big that when you stood at one end you were unable to see the other end.  There were lots of people on board.  The liner seemed to be somewhere like the Mediterranean – it was trapped – too big to turn around so it spent its time just going backwards and forwards and stopping at the same ports.  People got off and on and the ship took on provisions.  This seemed to be all that happened. The captain knew the liner should be in open water – that was where it was meant to be.  The watch crew on the bridge didn’t seem inclined to agree and the liner was too big to get through the Straits of Gibraltar.  It was already facing in that direction. The captain waited and then changed the watch.  The new watch were of one mind and decided to take the opportunity to move the liner when the tide was right. Suddenly the liner was in open water – don’t know how they got there. They couldn’t see land but interestingly small boats kept appearing bringing people and provisions to the liner.  They seemed to appear from nowhere and came just when needed. As I pulled away from the liner I saw on the side a cross at one end and a crown at the other – in between were the words ‘KINGDOM LINE’.

In the summer a visiting speaker brought a prophetic word that God was calling us to go into ‘deeper waters’ of adventures with Him. The way these two words fitted together really grabbed the attention of the leadership. As we discussed this, I was reminded of a word someone had for us several years ago of God wanting to change us from a cruise liner to an aircraft carrier. After much more prayer and discussion we feel that God is really saying something to us, and so we’re keen to respond!
Here are some contrasts I’ve thought of between a cruise liner and an aircraft carrier:
Our purpose
The cruise liner is for your enjoyment; the aircraft carrier is for your deployment.
Of course the church should care and grow those who are members but that must not be the limit of our efforts. To put it really bluntly: we are going to be with Jesus for eternity and all our troubles in this life will be forgotten. If we have a rough time temporarily at the expense of getting more people out of never-ending hell, so be it. So decisions have to be made not on the basis of my preference but in response to our purpose.
How we relate to the world
The cruise liner is for escapism, the aircraft carrier is for engagement.
Because they have different purposes, the two ships relate to the world differently. Because its purpose is to keep passengers happy, a cruise liner, when not steering well clear of reality, will only stop off at some of the nice parts of the world. An aircraft carrier, by contrast, engages with the real world: it gets involved in desperate situations. For the sake of the lost and the glory of God, we must have that attitude.
Who is on board?
The cruise liner has some staff and loads of passengers; everyone on the aircraft carrier is a member of staff – there are no passengers.
There is a truism in church life known as the 80-20 theory: that 80% of the work is done by 20% of the people. This is not what we see described in New Testament church life, where every person is seen to have an essential role, whether it is high-profile or ‘behind the scenes’. All the roles are different, but they are also all necessary.
With these and many other thoughts in our minds, the leadership of Brickhill are looking at everything we do and considering what helps us to behave like and become an aircraft carrier. A friend watched a documentary recently that described how the first attempts at making an aircraft carrier were just altered cruise liners but that didn’t work: the ship’s design had to be completely changed. Some changes that we feel need to be made may be painful or surprising. Some people may be redeployed, or wish to transfer to another ship. The point is to respond in faith to God’s great mission: the rescue of people from every tribe, tongue, and nation, and His restoration of all things. This will require our efforts and sacrifices, and will depend for its success on the power of the Holy Spirit. The good news is that He is willing and able. The question is: are you?
One final thought. There’s not much grace on an aircraft carrier, in regards to how orders are given and how the people on board are treated. Having said that, there’s not much grace on a cruise liner either because there’s no pursuit of holiness. It is our intention that there is plenty of grace at Brickhill because we are those who have been saved by grace and serve by grace. Changing our mindset doesn’t mean that we get nasty or hard, it means that we get more like Jesus: the most loving person who has ever lived, and also the most determined and missional. Apart from Him we can do nothing, with Him we can do all things.
To see the contrast between a cruise liner and an aircraft carrier, check out these two videos: