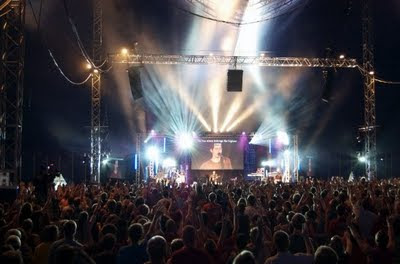 The first hour of Newday was the worst. With those skilled in the ridiculous arts of camping looking on rather than helping, it took me (and one helpful friend) the best part of an hour* to put my tent up. And what did I have at the end of it all? Something infinitely worse than my house, with the added bonus of a nearby security light aimed directly at me from the adjacent shower block, offering anyone who wanted a disturbing silhouette show at night as I got ready for bed. But such is the wonder of Newday, it was a price worth paying. And here’s why…
1. People
Taglines such as Newfrontiers’ “A family of churches together on a mission” can seem rather trite unless one experiences something like Newday. It is full of people serving together for God’s glory and their joy. Even the people who clean the toilets, it seems.
As well as loads of new faces and new initiatives, I kept noticing repeat offenders, those like myself who have an area of responsibility at the event which they serve year after year: Sarah was on bookings and knew pretty much everything; Phil and Mike were doing Just Looking as they have since unexpectedly landing the job a few years ago; Andy was leading worship at the evening prayer meetings, playing his own versions of well-known worship songs; Lisa and Warwick were in charge of the stewards; Owen, Robert and Lucy were zone hosts again; Ben was in charge of servers’ catering (may he be richly blessed for the Sunday roast).
I could go on and on, if I hadn’t done so already: hundreds of people were serving across the site. Many do so throughout the year, either in planning the event or running youth works. And here the fruit of many labours is seen, which is of course the work of another…
2. God
He’s just brilliant, isn’t He? From the start God has ‘owned’ Newday so extraordinarily with signs in the heavens – never to be forgotten rain – and on the earth – hundreds saved, hundreds healed. My job at the event is to co-ordinate the Ministry Team, those who pray with young people when they respond in the meetings, so I get a particularly close view of what God is doing in people’s lives. Here are just four amazing things He did:
Worth camping for, even if you’re as soft as me.
* By which I mean the worst part of an hour: the part that feels like several hours stapled to each other.