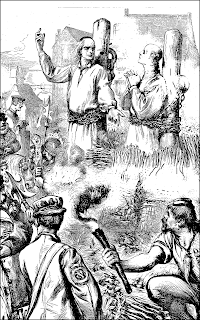 454 years ago today, two men were burnt at the stake in the city of Oxford for preaching that Jesus alone saves. Hugh Latimer and Nicholas Ridley were among the 300 or so Protestants killed by the Catholic Queen Mary in one of the most bloody episodes in England's journey to becoming a Protestant nation.

Latimer's words to his fellow-martyr were prophetic: "Be of good cheer, Master Ridley, and play the man, for we shall this day light such a candle in England as I trust by God's grace shall never be put out."

Whenever I hear their story and those words I am simultaneously profoundly grateful to God for the inheritance He has given me from people like this, and awed by the question of how I would have responded if I were in their situation. (This second point is entirely hypothetical, of course, as grace is given when the need is real rather than imagined.)
Labels: Reflections