The unsurpassable brilliance of The West Wing 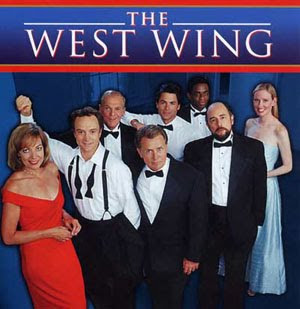 Apparently Season 8 of 24 is about to start; I really could care less. To be honest, I find it difficult to care much about any TV drama that isn’t The West Wing. Taste the best and anything else seems like a waste of time.
For the unaware, The West Wing is set in a fictional White House, revolving around the life and careers of the President of America and his senior staff. This White House is a left-leaning Camelot, a fantasy oasis for those parched by the reality George W Bush. I don’t agree with all that they believe but that really isn’t the point.
I remember discovering the show, with the help of The Sunday Times. One bored Sunday at university I read in the TV section of the paper about a new American political drama being broadcast for the first time that night. I watched, and was hooked. No-one else I knew was watching it, giving a self-righteous air of exclusivity but ultimately frustration that I had no-one to say, ‘Wasn’t that amazing?!’ to. This loneliness subsided over the series but then came controversy…
I didn’t make it past the end of series four. After the departure of creator Aaron Sorkin I felt that the quality diminished. It was probably still better than pretty much anything else on but I didn’t want to see it a shadow of its former self. It felt as wrong as watching George Best playing for Bournemouth having seen him in his United pomp. So I bought series one to three, and they are enough.
I bring this up because Debbie and I spent some of our Christmas holiday watching series two. There’s nothing like it. Perfectly-drawn characters, dialogue that’s nearly too quick to comprehend, exquisite comedy and pathetic tragedy, a (misplaced perhaps) sense of righteousness, and an unapologetic celebration and justification of loquaciousness. It is art at its finest: soaring, stirring, beautiful, provoking. Episodes end and I want to shout with exhilaration, and then go out and change the world. Deb prefers to just watch another episode, which is what we usually settle for.
Perhaps this time I’ll be persuaded to keep watching (no spoilers, please). But whatever we decide, the box-sets of the first three series will still be on my shelves. And, frankly, Jack, you’re don’t have a place there, or in my heart.
-
If you don’t already know the show, the clip below won’t make much sense but if you do, you’re welcome. Cue Dire Straits…
Labels: Good stuff Television