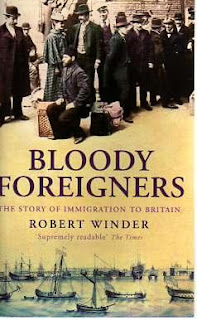 Neither of my grandfathers were born in the country they died in, the country I was born in. One of them fled from the second totalitarian regime to invade his country in a decade, never to see his parents again. The other came here for work, and was once arrested and briefly imprisoned because of his accent and the political ideals of some people he knew. Both married women who lived here (each of whom had mixed ancestry of their own), got jobs, and brought up their families.

They are two typical stories of emigration, the kind recorded and celebrated by Robert Winder in his book, ironically titled Bloody foreigners. In impressive – sometimes exhausting – detail, Winder charts the history of immigration to Britain, from the tribes who first came to this island to those who arrived just a few years ago. In doing so he undermines claims of English racial purity, be they subtle or not, observing, ‘Our roots are neither clean nor straight, they are impossibly tangled.’

Books like these are often treasure-troves of eyebrow raising facts and this one is no exception: Those classic English shops Tesco and Marks and Spencer were both founded by immigrants. Nearly one third of the British Army in World War One – three million men – came from the Empire. Jews were first forced to wear yellow identification badges by an English ruler 650 years before Hitler revisited the idea.

With an array of statistics and anecdotes Winder shows how each new arrival to these shores has been greeted, challenged, and thrived. It is a long story to tell because it has been happening throughout history. It is by turns encouraging and depressing: people have always come here in hope and often those hopes are proved well-founded – but not before much bitterness has been endured.

These mixed feelings continue with the realisation that the national conversation about this important and emotive subject is barely ever as carefully considered as this book. Winder resists simplistic arguments that portray all immigrants as fundamentally good or bad: they/we are all people, teeming with vices, virtues, and ambiguities. Elements of his conclusions are frustratingly ambiguous but that is part of his point: borders may be simple to draw but they neither contain nor confront ideas any more successfully than they do people.

With the reality of globalisation, the short- and long-term economic challenges Britain faces, and with the rise of far-right parties across Europe (predictable enough in times of economic hardship but exacerbated by the argument about immigration having been so poorly handled by governments), books like this are essential reading and the stories they tell need to known by our schoolchildren. We are currently relying on The X-factor for this which, by showing a human face instead of an angry headline, is remarkably in tune with Winder’s ambition.
Labels: Books Good stuff Reviews