This Sunday I preached at King's about the contrasts between those who obey God and those who oppose Him, as illustrated by Acts 5:12-42. I even had time to make what I thought was a cool-looking PowerPoint: 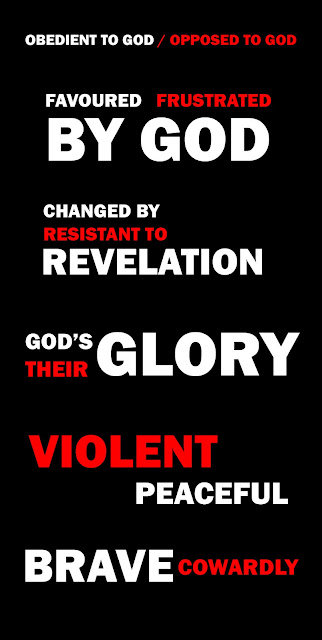 A couple of interesting things that I didn't have time to mention:

There’s great liberty in being freed from caring about your own glory, but it also means that we live by a much higher standard: Christ’s reputation is at stake in our lives. So we must work hard to make sure everyone thinks much of Him because of how we live. No-one could bring an accusation against the apostles except a lie or distortion – if only that was true of the church today. In his book Crazy love, Francis Chan writes, “We need to stop giving people excuses not to believe in God. You’ve probably heard the expression ‘I believe in God, just not organised religion.’ I don’t think people would say that if the church truly lived like we are called to live. The expression would change to ‘I can’t deny what the church does, but I don’t believe in their God.’ At least then they’d address their rejection of God rather than use the church as a scapegoat.”

The issue of being peaceful leads to questions such as ‘Would you ever fight in a war?’ and ‘Is it legitimate for Christians to protest about things?’ As I thought about this, my conclusion is that the gospel can never be accompanied with violence: Jesus is the Prince of peace, He did not come with the forces of heaven behind Him but in weakness. The gospel is hope for our weakness, and it is the triumph of God’s strength, not ours. Can violence be justified in other contexts? Against a militarily aggressive evil like Nazism, I think so. In reaction to an increase in tuition fees, I don’t think so. How we respond to injustice – which we must do – takes careful thought, and I hope preaches like this help give us a framework for considering our response to different circumstances.
Labels: Faith Talks