In the bleak start of winter 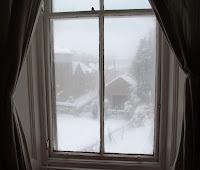 A winter's day
In a deep and dark December;
I am alone,
Gazing from my window to the streets below
On a freshly fallen silent shroud of snow.
I am a rock,
I am an island.*

As the summer, such as it was, began to fade, locals took great delight in telling me how much colder the weather was going to get. After a brief Indian summer they’ve been proved right. I don’t think I’ve ever been in such deep snow, and it looks like it will last for quite a while too.

After having a foot or so of the stuff dumped on us over the weekend, we now receive top-ups periodically throughout the day, whilst winds from Siberia ensure that the sound of melting is yet to be heard. The sound you can hear is absence, less traffic and everything muffled in a subdued silence that I enjoy. It does make Edinburgh look pretty but so do clear skies and sunlight.

The question I’m skirting around is whether the snow is friend or foe – by implication am I young at heart, or old before my time? As someone who works from home (no snow days for me) and lives an hour’s drive in normal conditions from his fiancée, who herself is having to commute to work, I’m ambivalent at best. I have taken photos, been in a snowball fight/wrestle, and helped build an igloo. All of which made the cup of tea that followed feel wonderful.

As plans have to be altered or cancelled, the opportunity to be humbled presents itself:


Come now, you who say, “Today or tomorrow we will go into such and such a town and spend a year there and trade and make a profit”— yet you do not know what tomorrow will bring. What is your life? For you are a mist that appears for a little time and then vanishes. Instead you ought to say, “If the Lord wills, we will live and do this or that.” As it is, you boast in your arrogance. All such boasting is evil. (James 4:13-16)

Is this climate change, or just weather? As yet the Thames has not frozen over so the pre-industrial age still has something to say for itself. Will I have to explain to my grandchildren that there was such a thing as snow in Britain, or that there was a time when we were not covered by it for six months of the year?! If so, we’ll have to start learning from these guys. 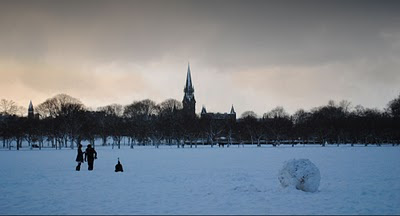 * Unlike the loner of Simon and Garfunkel’s song, my isolation is purely meteorological in origin.
Labels: Life in Scotland Reflections