This is how you lose an argument 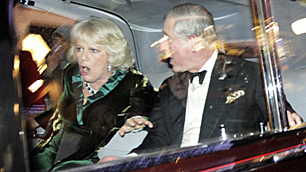 Whoever throws stones loses the argument. The nuances and urgency of your demands are immediately overshadowed by your actions, which the government can condemn, knowing that public opinion has now swung decisively against you.

What sympathy you still have evaporates when you say that damaging property and attacking police and royalty needs to be seen in the context of the financial difficulties future students face, i.e. that one person is worth more than another. You also remind people of babies who throw toys out of their prams. As The Daily Mash put it when reporting on the first wave of riots last month:


Britain today threw its weight behind middle class children who deserve everything handed to them on a plate because they're all so very special… In central London, more than 50,000 lazy, pretentious, self-absorbed protesters said it was vital for Britain's future that the cost of their education should not be allowed to eat into their handsome, white collar salaries and their capacity to pay for new world music and holidays in the less touristy parts of Italy.

So what to do? Get constructively involved. We live in parliamentary democracy, which is not the same thing as direct democracy, where everyone gets to decide everything. We vote for someone to represent us and make decisions for us, most of which we never think about. We get to choose who they are but over a third of eligible voters didn’t bother last time. If you voted for someone who found themselves confronted with the reality of government and reneged on a promise they made, vote for someone else next time, that’s how it works. It doesn’t sound very exciting but a letter written to an MP or MSP is considered to represent 1,000 constituents, so they are incredibly significant. Lobbying is possible through advocacy groups and protests that don’t involve throwing things. Many people do this, and tried to do so this week. It's harder than setting fire to things.