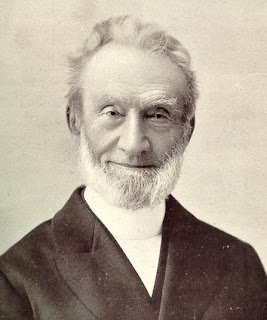 If you find the heavy-handed word-plays I use in my titles annoying, perhaps you’d prefer something rather more straightforward, such as The Life of Trust: Being a Narrative of the Lord’s Dealings with George Müller. I’ve just finished reading this autobiographical account of Müller’s first 55 years and whilst the writing style is as earnest (and longwinded) as the title, what it reveals of the man himself and the God he served is thrilling.

Müller is famous for establishing orphanages in Nineteenth Century Bristol and his writings give fascinating and challenging insight into what motivated him to do what he did, and how it was achieved.

His motivation
Though he was of course motivated by compassion for the plight of the thousands of orphaned children, this was not the ultimate reason for the work he began. Finding himself in a land where most Christians seemed to act as if God did not really exist, Müller determined to show them the reality of God’s desire and ability to work on the earth now:


“The first and primary object of the work was, and still is, that God might be magnified by the fact that the orphans under my care are provided with all they need, only by prayer and faith, without any one being asked by me or my fellow-labourers, whereby it may be seen that God is faithful still, and hears prayers still.”

His method
As the above quote shows, Müller never asked anyone for anything. He took no salary, held no fundraises – he just prayed a lot, and let people know what was happening. Over the course of his life he received millions of pounds given in donations that led to the construction of several large orphan houses, as well as supporting many other evangelistic enterprises around the world. The only explanation possible was that God was real and answered His people’s prayers.

His trust
Catchy or not, A Life of Trust perfectly describes Müller’s way. He took seriously what the Bible says about God’s ability to provide for His children, which is to say that he put it to the test. Again and again he was faced with not knowing where provision was going to come from, and every time he responded by trusting God. When his prayers weren’t answered as he expected, he was not downhearted but curious as to how God would prove Himself yet again, grateful to have his faith tried, and as determined as ever to seek God in prayer:


“The less [in donations] there comes in, the more earnestly I pray, the more I look out for answers, and the more assured I am that the Lord, in His own time, after He has tried my faith, will send me larger sums, and, at last, all I need.”


“I saw more clearly than ever that the first great and primary business to which I ought to attend every day was, to have my soul happy in the Lord.”

His faithfulness, and God’s
Müller’s steadfastness seems all the remarkable in our transitory times. He refused to distrust God or act contrary to how he believed God has called him to live. He moved to Bristol in 1832, and the book ends around 1860 with him still there, but the last thing you could accuse him of was getting stuck in a rut. “Nothing but positive inability to go forward ought to keep me standing still,” he declared, and his Narrative testifies to this repeatedly. One example, his first great building project, concludes:


"The work of the building commenced on July 5, 1847. Six hundred and seven days I sought the help of God day by day, before we came so far as to be able to commence the building; yet at last He gave me the desire of my heart."

Faithful with small things, he was given more and more and more, which creates a striking sense of continuity and contrast as the years go on: from praying for the next meal to arrive, to receiving donations worth millions of pounds today for massive building projects. This is what God can do with a life that is surrendered fully to Him. Later biographies might be easier to read, but to get close to the man himself was inspiring and has forced me to think deeply again about my trust in God.
Labels: Books Faith Good stuff Prayer