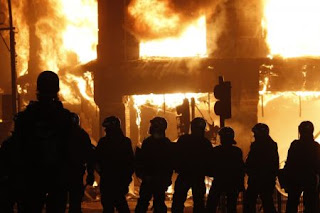 Describing the early years of the nation of Israel, the book of Judges ends with this chilling line: “In those days there was no king in Israel. Everyone did what was right in his own eyes.” We saw this last night and it happens in more subtle ways all the time as people entice and trample each other for their own ends, with knives on estates, with special offers on the high street, and policies in parliament. There are fires in every city and in every heart.

As we watched the burning of London in the news last night, my ex-firefighter friend commented on the strategy of his former colleagues. Some blazes were too far gone, he said, you just had to let them burn out and try to stop the flames from spreading. Churches don’t have that option because a King has come and charged us with spreading the influence of a Kingdom characterised by grace, mercy, justice, peace and reconciliation. That we have this in some small measure already – that for some of us what happened last night is considered unusual – is a reason to be thankful. That much more remains to be done is obvious and should motivate us to pray and work harder than ever before.


“As Christians, our response is never to stand by and watch and complain, but to awaken ourselves to the appropriate Godly action.”

“We are not sent to minister to a congregation and be content if we keep things going. We are sent to make war...and to stop short of nothing but the subjugation of the world to the sway of the Lord Jesus.”