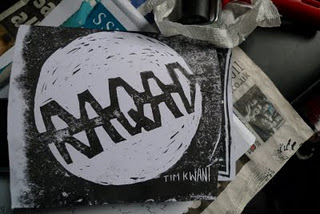 The quest for fascinating, thrilling Christian worship music can be bittersweet. Beams of dazzling light from Thomas Tallis to David Crowder Band pierce through some rather cloudy skies. The less hopeful might have a level of expectation not much higher than some well-expressed truth and a stirring riff. So it’s a joy to discover Raqad by Tim Kwant, with a dynamic focus on God, layer upon layer of ideas, and songs that deserve repeated listening in the knowledge that more often than not something new will be found in them to appreciate.

There songs here have been crafted, decisions have been made about tone and arrangement motivated by the song’s agenda and no lesser reason (i.e. experimentation for its own sake).  Opener You Make All Things Right puts familiar theological statements in an unfamiliar setting: chords, clicks and bleeps buzz in languid loops then leap into loud celebration before blissfully returning to earlier themes: the worshipper’s journey from sleepy reaffirmation to realised joy and satisfied love? Oh! Worship the King is sung before God’s glorious throne and is thus suitably noisy and busy – soaring guitars and prancing harpsichords vie for attention – whilst preserving the worshipper’s awed perspective. At the album’s heart is the title track (raqad means to skip about, leaping and dancing), a puzzling then dazzling twelve-minute electronic expedition that surges joyfully from one direction to the next with countless ideas, each fully though briefly realised. What follows will seem like relief to those who prefer their music unplugged: three tracks stripped of computer-generated noises and built around a guitar and voice. Reflective, relieved even, after the raqad, with a sudden yearning ending that stirs the heart and mind.

Listeners will draw on their own references. I was reminded of more recent Radiohead (without the whining), and Sigur Rós atmospherics (without the cooing). Kwant himself cites Sufjan Stevens, Glasser, Four Tet and Ratatat.

A typical response to monocultural worship is to smash two styles together in the hope that they work, Raqad instead plumbs depths and explores possibilities within a genre. That’s probably harder, and certainly better. In his sleeve notes, Kwant confesses his ambition:


I often find that worship music has its own genre, you know it’s a worship after that first shimmering electric guitar note. I wanted to make music people would enjoy and that would maybe aid them in their personal worship to God.

The album is only available in physical form at present: a limited run of 100, each in a hand-printed cover designed by Luke Fletcher, is being sold to help Tim pay his way through a year’s internship for Hope Church Glasgow. Contacting him to get hold of a copy could be the best thing you do today.
Labels: Faith Music Reviews