Writing to my Iranian Ambassador 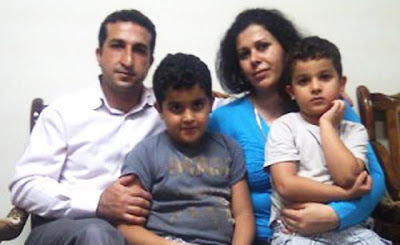 The case of Pastor Youcef Nadarkhani remains unresolved and the British media remains less than concerned than it might be if he were, say, a photogenic young woman. The reasons for one foreign court case attracting more attention than another say as much about the consumers of media as the producers, so why not set aside cynicism and indignation and just try to help?

According to news reports collated by Wikipedia, these are the facts:


"Nadarkhani pastors a network of Christian house churches. He is married to Fatemah Pasindedih, and they have two sons, ages 9 and 7

"In 2009, Nadarkhani discovered a recent change in Iranian educational policy that forced all students, including his children, to read from the Qur'an. After he heard about this change, he went to the school and protested, based on the fact that the Iranian constitution guarantees freedom to practice religion. His protest was reported to the police, who arrested him and placed him before a tribunal on October 12, 2009, on charges of protesting.

"After conviction, Nadarkhani was transferred to a prison for political prisoners, and denied all access to his family and attorney.

"On November 13, 2010, the verdict for the trial of September 21–22 was finally delivered in writing, indicating that Nadarkhani would be executed by hanging.

"On October 1st, 2011 the Iran state media put out a report claiming Nadarkhani is facing the death sentence for rape and extortion, not for apostasy and refusing to renounce his religion, as his lawyer, human rights groups and Western news media have reported... Jordan Sekulow, Executive Director of the American Center for Law & Justice (ACLJ) said 'We're trying to determine if this is the state-controlled media throwing it out there. There's been no mention of any other charges than apostasy in trial documents.'"

Christian Solidarity Worldwide (CSW) are encouraging people to contact their Iranian Ambassador to express their concerns about how Pastor Nadarkhani is being treated via this site. My day is really busy, and I was feeling slightly concerned about giving my contact details to the Iranian Embassy, and then I realised what a poor effort at compassion that made for, so I sent them an email constructed along the lines of CSW's suggestions:


Your Excellency, the Ambassador of Iran,

I would be extremely grateful if you would pass on my concerns to the Iranian Government about the case of Pastor Yousef Nadarkhani, who I believe has been charged with adopting Christianity and faces execution for having done so.

As I'm sure you have been told by many others, the prosecution of Pastor Nadarkhani is a violation of Iran's constitution, as well as the International Covenant on Civil and Political Rights. Furthermore, it does nothing to help Iran's image as a great nation, and everything to encourage those who have a negative opinion of Iran.

It is my hope, along with many others around the world who wish Iran no harm, that the Iranian judiciary would cease to pursue their current course of action against Pastor Nadarkhani and will acquit him of all charges.

Once again may I thank you for passing on my request,

With the greatest of respect,

If you want to do the same, feel free to copy my letter or write your own via the campaign site. If you're a Christian, here's someone who really needs your prayers.