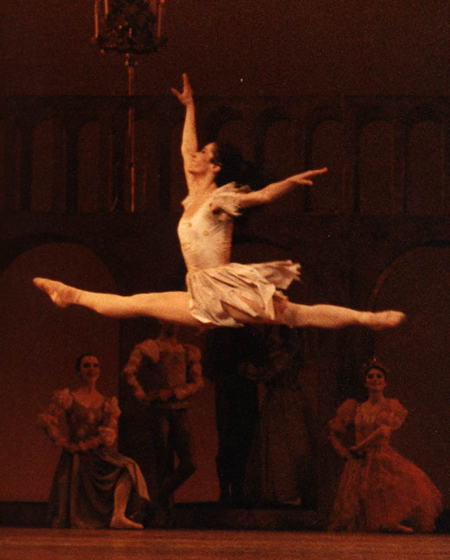 Learn something new about your wife. Remember it. Act on it. “I love watching dancing, ballet,” she said as we accidentally watched Strictly in September. Happy Christmas.

So to Edinburgh’s Festival Theatre in January for my ballet-watching debut. Tchaikovsky’s The Sleeping Beauty, interpreted and performed by Scottish Ballet. I have a general understanding of what I’m going to see (dancing) but not much more. My ignorance must be obvious to the rest of the audience because I’m a man – there are about ten of us present and some look like they’re here because they lost an argument.

Looking through the programme I read the plot synopsis, which adds up to little more than a warning not to invite fairies of any sort to your child’s christening, and a hundred-year slumber for all the Russian royal family, which both spares them from the Bolshevik Revolution and two world wars, and allows for more costume changes. It also means that the story ends in London, 1946, which just so happens to have been when this ballet was first performed on these shores. I like intertextuality, even when I don’t understand it.

What the programme’s photos promised, the performance delivered: a constant flow of movement and rich colours. They are a vibrant, mesmerising combination, most captivating in the duets and ensembles where the complication and harmonisation of the choreography was staggering. How two people could unite so perfectly, how a crowd could move in so many different ways simultaneously without disaster. The most impressive aspect of an individual performance, except for the ongoing mysteries of how their heads moved when they spun round and how they kept moving on their toes, was that of the (mostly non) Sleeping Beauty herself. Moving through the air seemed as natural to her as treading the boards, and the transition from one to the other disappeared.

All of this led to an initial sense in my mind of separation that was greater than the orchestra pit between me and the stage. Anyone who has seen me on a dance floor or football pitch will know that I’m less balletic and more Balotelli trying to put on a bib. I’m much more comfortable with words in one form or other, which isn’t really ballet’s style. But as the performers moved across the stage and through the air, I searched for metaphors to speak about their power and grace, and the sum of what they were doing. Nature failed me again and again. Their limbs had the sinewy strength of plants, their speed of movement was like that of birds, but that wasn't enough. Maybe my imagination failed me but the ludicrous beauty of it all, how wonderfully unnecessary the whole event was, led me to the conclusion that this was too human a thing to be described and comprehended in terms of anything else on earth. I couldn't join them on stage any more than I could help Rembrandt in his studio, I might not understand them as well as I could a poem or game of football, but I could smile and applaud with unexpected affinity.