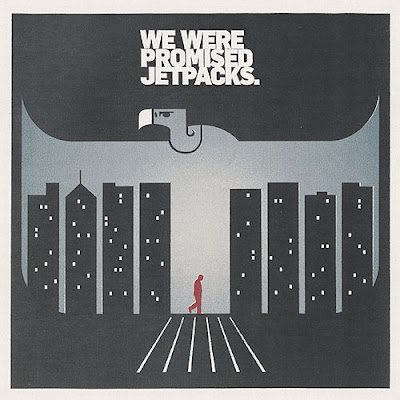 What's not to like with a band who give themselves the name We Were Promised Jetpacks? Before even listening to their album In The Pit of The Stomach they had made me smile. The artwork is pretty sharp too, but would there be any substance to go along with the style points? Eventually I've concluded there is. This is a noisy, guitar-laden album that required a few listens to get into my head, after banging loudly on the door for quite a while. Now it has me hooked with its enticing patterns enticing repeated plays.

The most obvious comparison from my experience is the Arctic Monkeys, with throbbing bass notes, thrashy guitars, and regional accents (which is the most patronising phrase I can think of to describe the wonderful Edinburgh burr of Adam Thomson). Opener Circles and Squares has a near-identical formula to The View From The Afternoon but there isn't the same wry humour to be found here. Instead, there's something more moody, melancholia mixed with the exuberance of being able to turn your amp all the way up (Human Error). Guitars dominate so much that lyrics often seem to have been shaped by riffs (Hard to Remember) - the Manics this is not.

This album absolutely does not work as background music, thank goodness in an era of so much so-so sounding fluff being made by guys with acoustic guitars and wistful smiles. It's great to be confronted with something that's yearning, straining for your attention by battering you with sound, and finding some great tunes and lines when you give in.
Labels: Music Reviews