You don't have to wear a cross 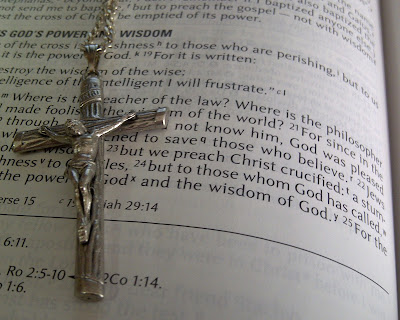 In the news this morning, Cardinal Keith O'Brien has been quoted urging Christians to wear a cross ever day in the face of the growing marginalisation of Christianity in the UK. That is a mistake of style over substance. When Jesus said "take up your cross and follow Me" (Luke 9:23), He wasn't talking about a piece of jewellery, He meant living a life of astonishing self-sacrifice.

Some religions do teach that the wearing of certain clothes or ornaments is a vital part of a believer's life, but Christianity does not. It is far more concerned with what is going on beneath the surface...


Dear friends, I urge you, as aliens and strangers in the world, to abstain from sinful desires, which war against your soul. Live such good lives among the pagans that, though they accuse you of doing wrong, they may see your good deeds and glorify God on the day he visits us. (1 Peter 2:11-12)

Immediately after this, Peter teaches that if it became illegal to wear a cross, Christians shouldn't wear one. They should do something much more subversive:


Submit yourselves for the Lord's sake to every authority instituted among men: whether to the king, as the supreme authority, or to governors, who are sent by him to punish those who do wrong and to commend those who do right. For it is God's will that by doing good you should silence the ignorant talk of foolish men. (1 Peter 2:13-15)

A few lines later, Peter actually suggests that wearing jewellery is exactly the wrong thing to do!


Your beauty should not come from outward adornment, such as braided hair and the wearing of gold jewellery and fine clothes. Instead, it should be that of your inner self, the unfading beauty of a gentle and quiet spirit, which is of great worth in God's sight. (1 Peter 3:3-4)

Of course, wearing a cross may inspire you, show what you believe to others, and help to start conversations with people in need of God's help, but surely living God's way will do this more profoundly? Good living is much harder than wearing a cross, but it is this that takes Christianity from the margins to the centre.
Labels: Culture Faith