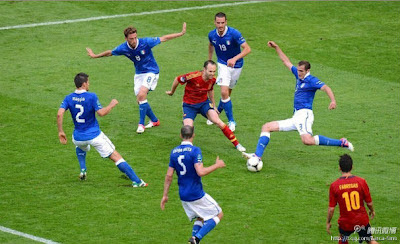 Like most people, I haven’t gone to Ukraine or Poland. It seems that for many fans, the east/west culture clash is less fascinating and more frightening, and perhaps in these hard times they've decided to save their money for the 2014 World Cup, in Brazil. There seems to be a lack of atmosphere in the stadiums except for when the hosts or the Irish have played, at which matches the commentators have been able to indulge in the most patronising nonsense.

Back home, the competition for broadcasting supremacy isn’t exactly raging but both sides do try to pretend the other doesn’t exist: “You can watch highlights of tomorrow’s games...” is the closest they come to saying that tomorrow’s games are on the other channel. Neither title sequence is particularly memorable, though after several tournaments in which the big players flopped somewhat, the deification of the likeliest lads has been avoided. ITV’s choice of Prokofiev’s Peter and the Wolf theme tune is a bit obvious but combined with wooden giants gathering from across the continent the result is incomprehensible. The BBC take a bad idea (things on the nations’ badges come alive, which works better with English lions than Irish shamrocks), make it with ten year old computer graphics, and hope that a stirring but irrelevant piece of music will get the pulses racing. Their analysis fails to do so as usual, with the honourable exceptions of Lee Dixon and Harry Redknapp’s leftfield but entirely accurate prediction that the Dutch would struggle. On the other side (identity withheld), Jamie Carragher’s passion for the game and Roy Keane’s simmering ferocity make them interesting pundits but they’re always pressed for time by Adrian Chiles’ slightly irritating mateyness, the chanting from the square below their terrace studio, and the need to show more adverts. I’m yet to see an advert related to the tournament that has an ounce of wit, most are for gambling, and one encourages men to lie to their women, pretending they’re at work when really they’re at a pub watching the football. The pathetic childishness would be staggering if it wasn’t so commonplace.

The prevalence or possibility of racism continues to lurk in the shadows. My friend Nicholas Ferguson has written strongly about what's really at stake when UEFA declares that players can't leave the pitch if racially abused. There is nowhere on earth where this isn't an issue, but to engage unquestioningly with countries who don't try to confront it seems like cowardly greed.

As for the games themselves, the most thrilling forward display came from Russia, whose rotating forwards tormented a weary-looking Czech Republic, and if Kerzhakov hadn’t borrowed Fernando Torres’ shooting boots the score could have been even more comprenhensive. Torres himself showed with his movement when he came on against Italy how much more dangerous Spain would be if David Villa was fit. As it was, Spain against Italy was probably my favourite match so far. Though not obviously dramatic, the artistry of Pirlo conducting the Italian midfield at the grand old age of 33 (whither Paul Scholes, England?) as it battled the spinning webs of Spain’s Xavi and Iniesta was fascinating, and is captured brilliantly by the almost-balletic photo above. (With that many confused metaphors in one sentence I should be designing TV companies’ opening sequences.) England are not as bad as people had feared, and even showed encouraging flickers of possibility when Ashley Young, Welbeck and Oxlade-Chamberlain combined. The addition of Rooney could be the final piece of an attractive attacking jigsaw but they’ll probably still get knocked out after a brave performance in the quarter finals. I expect Germany to win the competition. Although they weren’t spectacular against Portugal, it’s how you end a tournament that matters most, which is why I wouldn't put my metaphorical money on Russia. But as my very average fantasy football team’s performance has shown yet again, my predictions aren’t worth much, so I'm grateful that Ray Winstone's floating head hasn't encouraged me to pour my money into the bookmakers' pockets whilst considering that to be a manly thing to do.

Talking of fantasy football, who will be the player of the tournament? It won’t be either of the men currently playing who are held to be among the greatest ever: Ronaldo is in too weak a team to allow his brutal brilliance to flourish, and Messi is in too South American team to play much here. The creative players interest me most: I love the subtle invention of Iniesta; Arshavin and Sneider have also pulled strings beautifully, with varying degrees of success so far, but I’ve found myself missing the player who in past tournaments would fill an entire half-time break with highlights. While some players succeed by playing at a faster speed to all around them, Zinedine Zidane set the tempo for everything around him. Some mesmerise their opponents and tire them out with relentless tiki-taka passing, he, like Roger Federer in his prime, seemed to involve the opposition in a conspiracy to make the game look beautiful. He’s on another level to anything we’ve seen here yet...