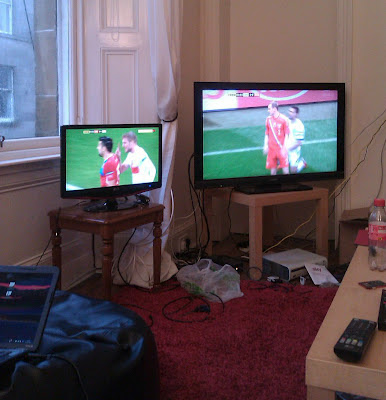 The final pair of games in each group were played simultaneously to reduce the chances of match-fixing or dead rubbers, and with all but two teams still hoping to make the quarter finals every game mattered. One of my friends decided that the only way to do this excellent situation justice was to have two TV screens on at once. This seemed at first to me like the kind of ADHD/always-on-the-internet behaviour that belongs to a younger generation than myself but after watching two games at once in room with about ten loud people whose attentions moved from one game to the other at different times I’m totally sold on it. This set-up (above) means you’re nearly on top of all the action, and have something to look at whenever the players in your game of choice are rolling around on the floor again, or the director has found yet another woman in the crowd to letch at. It is, however, extremely confusing when the teams in both pairs of matches are wearing similarly-coloured kits.

I didn’t do this for Group A’s games, so I have no idea how the Greeks managed to pull off their shock win. The Russians once again displayed a lack of tournament nous that only the Dutch can rival. Holland (yes, you can call The Netherlands that, they’re not bothered) started well but Ronaldo finally turned up once he had found a disjointed defence. He is Portugal’s greatest strength and biggest weakness. As Jonathan Wilson explains, all the goals Portugal have conceded have come from the side of the pitch he is nominally responsible for helping to defend, but when you score as many goals as he does you probably still end up in credit. In Group B’s other game the Germans were given a bit of a fright by Denmark but managed to make it three wins out of three and continue to look ominously efficient whilst still being entertaining.

Spain’s progress was also ultimately smooth but they look less composed than the Germans and more weary. Italy are uncharacteristically enigmatic with their traditional organisation undermined/completed by whichever performance Balotelli comes up with. The French are even less predictable (though they have the best kit I’ve seen in an otherwise disappointing fashion show). With all of this happening, England seem almost serene, at least when you forget about little they controlled their final game against Ukraine.

The standard of football has remained high, with several great goals, but sadly the opposite has remained true of many fans. Uefa’s decision to fine the Croatian football association less for the racist behaviour of its fans than it did a player for showing a company’s name on his boxer shorts would be hilarious if it wasn’t so serious. At least the retiring Croatian manager, Slaven Bilic spoke out against them: “I don't like these people, I don't want these people supporting us. We don't want them in the stadium. We are angry with these stupid fans as well. We need to stop them forever.”

Bilic is one of several managers who have made their mark on this tournament. Almost all have attempted to play attacking football, which is never guaranteed at big tournaments. Then there’s Italy’s Cesare Prandelli who led his coaching staff on a 13-mile walk to a monastery at 3am after his team’s final game to honour a promise he’d made to the monks there. Ukraine’s Oleg Blokhin, meanwhile, offered to fight a reporter who criticised him, and Joachim Low was so confident in Germany’s performances that his attention wandered to teasing the ball boys (below). As for Roy Hodgson, he has exceeded expectations in many ways and has brought a clarity and dignity to the job that hasn’t been seen for a long time.

England have moved rapidly from no hope, through hope and are now pushing beyond hype, despite the patchy nature of their performances. They have shown good character, especially captain and creator of three goals Gerrard, and Parker, whose desire to throw himself in front of every opposition player with the ball might end up costing him a penalty but will earn him plenty of Anglo-Saxon praise along the way. It’s not like watching Spain or Brazil, but what did you expect?

England’s quarter final would seem the toughest to call, and might be the hardest to watch with two slow, defensively-minded teams in action. Elsewhere you would expect Portugal, Spain and Germany to progress but there have been enough surprises so far to give France, Czech Republic and even Greece more than a glimmer of hope.