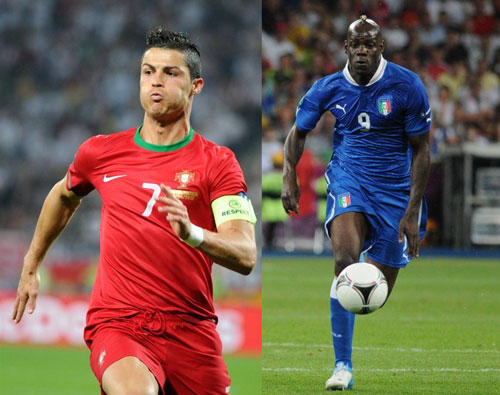 In the 89th minute he was rushing towards the opponents' goal. He'd checked his run to receive a slightly errant pass but it was under his spell now and inside the penalty area. It was the moment, his moment. He had scored countless goals from the position... Ronaldo blazed the ball over the bar. He looked pale as extra time wore on, perhaps fearful of taking a penalty. Although he'd scored about 25 in a row during the season, he missed in the Champions' League semi shoot out this season, and did the same when playing for Manchester United in the final against Chelsea. Maybe that's why he was fifth on the list of penalty-takers, too late as it turned out. Portugal had shown more fight than most teams who face Spain, and the Spanish hadn't liked it. Watching them play more long balls than usual (i.e. any) was bizarre, and they seemed ill at ease. Despite this, and despite his late chance to win the game, Ronaldo was peripheral to the action. He's a great player, but at this key moment he didn't deliver - and champions usually do. There's no question that's what Spain are, the question marks over Ronaldo remain.

There will probably always be questions marks around and within Mario Balotelli but in Italy's game against Germany he was certain and awesome. His second, decisive goal was ferocious - the goalkeeper sank to his knees in submission. Even he felt the power of it, tearing his shirt off and tensing his muscles like a prize fighter. That was noteworthy because Balotelli rarely celebrates scoring, arguing that it's his job and it would be ridiculous if postmen, for example, celebrated every time they delivered a letter. It's that kind of attitude that reminds me of Eric Cantona when I see him play. There's an aloofness, a sense of difference that others can't comprehend. He can't channel this separateness as successfully as Cantona did at his peak, he still blows hot and cold. If he'd been in this form against England there would have been no need for extra time. I hope it isn't patronising to say that in a tournament in which racism has always been at the edges, personal triumph for him would be a fitting conclusion. Ably supported by yet another resolute Italian defence, and the elusive creativity of Pirlo, it seems possible. But Spain are proven champions, and who knows which Mario will turn up.
Labels: Sport