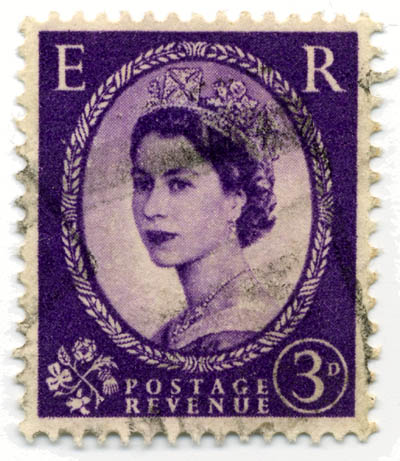 TV with the sound turned down always seems truer: more honest and vulnerable to rebuke, and the Jubilee celebrations are no exception... That guy from the Doctor Who spin-off is with some people who are/will be ringing bells... Back to the studio where a man and woman are having a competition to see who can show the most teeth to the nation... And now we've got crazy people (presumably not what the TV is calling them) dancing like it was 1952... People grinning and waving flags, being asked questions that mean nothing...  On to the main show: boats on the Thames, loads of them, Caneletto's vision remade and Dunkirk remembered, and it looks brilliant. Presumably TV people are telling us that but they needn't bother...

Then, there she is. Small, old but not elderly, in a dress that I would describe as "white" but is probably getting more detailed praise from the commentators. She's so much less expressive than everyone around her: her family, the hundreds of thrilled boaters and of course the TV presenters. Does anyone handle being the centre of attention better? A wise, encouraging, constant presence of a grandmother, everyone's favourite family member.

What more can be said about the Queen that isn't as much second-guessing as all before it? Her quiet dignity and sense of duty seem as out-of-time as the institution of monarchy itself, and yet are what she is cherished for. And she "reigns" over a people who are able to cheer, mock, watch with sound turned down or not at all, which seems a happy and glorious arrangement for us all.
Labels: Culture Thankfulness