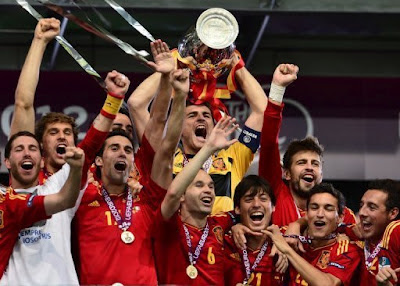 Euro 2012 is done and I miss it already. Domestic football is on its way with smaller, shriller squabbles and that doesn’t feel like any consolation. Nor does the prospect of a bigger tournament in four years time with the inevitable dilution of quality, or Michel Platini’s suggestion that in 2020 it could be held in cities scattered across Europe. No-one’s said it yet but why not in the Middle East or Asia, UEFA?

So this has been a tournament to cherish. A ball and match officials that haven’t attracted any attention because they’ve helped rather than hindered the game. Some great goals. Less trouble off the pitch than predicted (a relative success). Some exciting games, especially in the group stages. Much less histrionics among the players and managers. A degree of humility in the England team... Personally, I’ve watched it with lots of friends, been hopeless at fantasy football, but won a result-predicting game with Deb which went down to the very last match. But this competition has been all about Spain, so this post is just going to be about them.

There was a growing body of thought that Spain weren’t quite as good as we all thought they were. Or at least, they’d faded a little. It started before the tournament. Barcelona had been held at bay by Chelsea, and several teams took that blueprint with them into the east. What was more, Spain didn’t really know how to play without the incision of the injured David Villa, whose understanding of tiki-taka is more advanced than any other striker they had. They couldn’t finish what they started, so they just passed the ball forever until their opponents got bored/tired/unlucky. Puyol’s absence removed one of their great leaders from a defence that was accused of being a weakness.

For the fans and teams of northern Europe, whose wintry climates don’t encourage on-pitch patience and precision, vindication was tantalisingly within reach. Setting aside a comfortable win against the barely-there Irish and a not-really-there French sides, the evidence was accumulating: a draw with Italy, a late show against Croatia, and penalties against Portugal all suggested that Spain didn’t like it up them. Even Arsene Wenger suggested that their tactics had become too negative.

Never mind that they score late goals more often than other sides because they’ve worn down the opposition. Never mind that Portugal’s centre back penalty-taker lumbered up for the wrong penalty and then blasted against the bar when it was his turn, whilst his Spanish equivalent coolly chipped his in. Never mind that champions care and play best when it matters, unlike any of Wenger’s recent teams.

Speaking on the BBC’s coverage before the final, Gianluca Vialli (whose English was better than the native speakers on the show) spoke about Spain’s missing striker. He wasn’t missing at all, Vialli said, he was the space in front of the midfield. British football couldn’t understand this but it was how Spain were dealing with the lack of a fitting player. As the manager put it, “There is no fixed point; instead there is combination, control, mobility, unpredictability, players arriving not waiting.”

If there was a risk that Spain were becoming abstract in their art, focusing on just one aspect of the game (passing) and comprehending everything else through it, their performance in the final killed that idea as effectively as they defeated Italy. Everywhere on the pitch they pressed, hurrying and harrying Pirlo in a way that so-called hard-working teams like England never did. Once they got the ball they were ruthless, Iniesta and Xavi slicing through a bewildered and weary defence to set up two great goals, one of which was scored by the marauding left back. Who needs strikers when your full backs thinks and plays like that? Long before injury reduced the Italians to ten hopeless men, it was over. They scored two more just to make sure that everyone understood, with a goal and assist and therefore the golden boot going to Torres. A striker.

At the other end of the pitch, Italy didn’t score any, the same as every team that has played Spain in a knock-out round of an international competition since 2006. 2006! Remember how the defence was suspect? This left them as the tournament’s top scorers, and with the best defence, coming after a perfect qualifying campaign of ten wins out of ten, which they also did for the 2010 World Cup. They pile up stats as they pile up trophies and, surely, admirers – at least for how they played when it mattered most.

And by the way, of the nineteen outfield players in their squad, only two are over thirty years old. Two Euros and two World Cups? It will take a special team to stop them. Platini may be suggesting that future Euro tournaments could be played in different cities, Spain are currently playing on another planet.