I’m definitely on the pro-Olympics team. I know and appreciate most of the arguments against them but they’re here anyway, so why not enjoy them? The torch’s tour of the UK has been a brilliant success – I’ve never seen so many people out on my local streets enjoying themselves together. Now the Games have begun and I’m excited to be able to go with loads of others to share in something that doesn’t really matter. Thanks to the unstinting efforts of a friend I’ll be in London for a days’ worth of events next month but I managed to get my own tickets to see some football. It wasn’t very difficult but £20 for two games in Glasgow, including the Spanish team seemed like a bargain to me and turned out that way, with five goals scored, two red cards, and a shock as Spain lost to Japan. 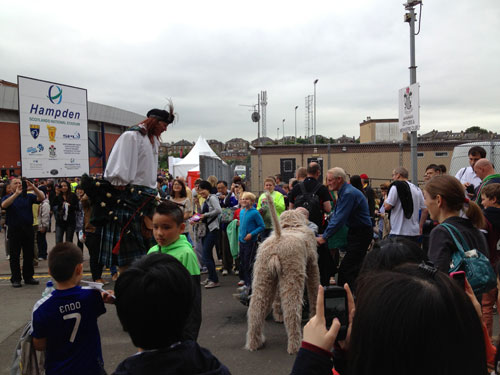 We had been advised to arrive two hours before kick off, but as the first game was Honduras against Morocco we weren’t expecting massive crowds. Understandably, they had a combined total of about two dozen fans in the stadium. There were queues to get in but this was more to do with security. The process we went through was a bit odd but didn’t take too long: empty your pockets into a clear plastic bag, get patted down by a police officer, give the clear plastic bag back (really), and then go through the turnstile. Five minutes and we were in. Queuing for food was a much worse experience: about forty-five minutes for a pie. It was no more of a rip-off than what’s usually sold at sports events, and no healthier either. 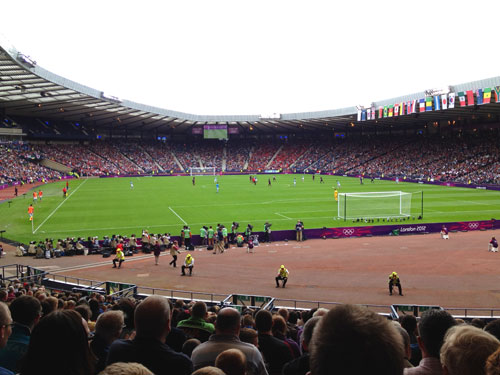 Our cheap tickets got us very decent seats, about thirty rows up behind one of the goals. It seemed that not many people had decided to join us at first but the numbers had doubled by the time the second game kicked off. There are always a lot of Spanish and Japanese tourists in Scotland, and many of the locals were wearing Spanish shirts too. The stadium announcer proudly declared that the attendance of 37,726 was a record... for this Olympics so far. Considering that only women's football had gone before us this seemed a little disingenuous.

A friend who came with me and watches a lot of live football noticed as we walked to the stadium that there wasn’t an edge in the air that there always is for truly competitive games. Fans mixed happily, mostly because the majority were neutrals and under the age of 14. It was a slightly surreal atmosphere but the games were entertaining and this led to an overall feeling of a fun day out, exactly as it should be. 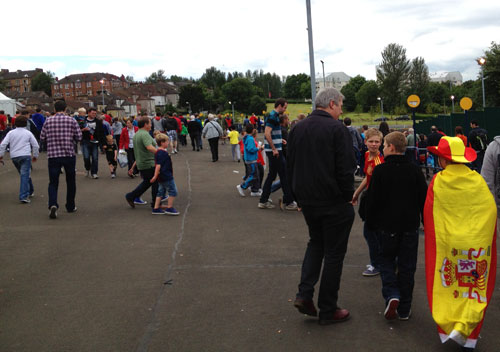