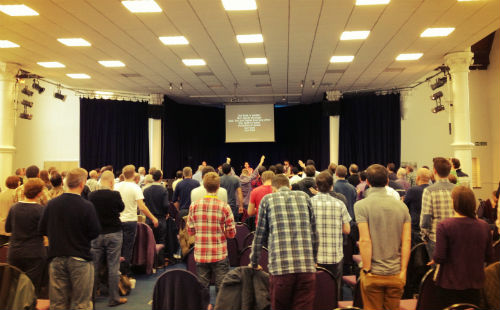 I’m part of a family of churches called Newfrontiers which has grown from a handful of friends in a living room discovering New Testament Christianity together a few decades ago, to hundreds of churches around the world today. We’ve recently gone through a change in how we relate to each other which is well described by Andrew Wilson as what happens to a family when children grow up. One of the first practical differences that this has made for me is the end of a national leaders’ prayer and fasting event that I’ve attended for the past ten years. In its stead there are several of these happening across the country and as King’s has chosen to come under Dave Holden’s apostolic authority we headed this week to his patch, Sidcup, to pray and fast with other churches who have done the same.

We landed at London City, just about scraping over The Shard after a plane’s eye view of London’s greatest hits. It was nice to be back in the south where I could flatten my vowels and be a bit more relaxed about my consonants. Sidcup is less convenient for us than Peterborough, the previous location, but I stopped complaining after chatting with some guys from Holland who had got up at 2.45am to start driving there. Leaders from France and Italy had also out-travelled us.

I’d been concerned before the event that a gathering of leaders for something new would inevitably lead to loads of talk/prayer/prophecy about the newness of it all and what that meant and what would happen next etc. etc. and we wouldn’t get around to focusing our attention on God Himself. Those fears were immediately disarmed as the whole of the first session was given over to worshiping and enjoying God. After a really busy couple of months this was food and drink to my soul and I had a wonderful time of not having to think about anything or anyone but Jesus.

Over the two days we did pray for a lot of stuff too: ourselves, our churches, different nations. Stories were shared about God healing people, and there was excellent teaching what we’re going through. This was much like the Newfrontiers prayer and fasting events of old but there was something tangibly different here too. The best word I’ve been able to think of to describe it is “honest”. Usually that’s a disguise which really means “hard/awkward/painful” but that wasn’t the case here at all. This was real and intimate, we were able to admit when we weren’t quite sure what was going to happen next, there wasn’t the unspoken sense of competition that can sometimes sneak in when many leaders are together. It wasn’t simply that there was about 150 of us rather than 800 as before – I’m not someone who thinks that small is beautiful – but there was a feeling of a family being together with an agility to follow the swiftly-moving Spirit. Dave personified this and encouraged it in the rest of us. These qualities have always been essential to what Newfrontiers is, so I was excited and thankful to find them again at the start of this new chapter in our adventures.

Keeping a personal tradition of my own, here's a leaders' fashion update. A lot of people seem to have spent their money on iPads rather than new clothes, so check shirts and muted colours remain on-trend, as the photo above proves. Skinny jeans and bright colours are the domain of the under-30s only. This is a good thing.