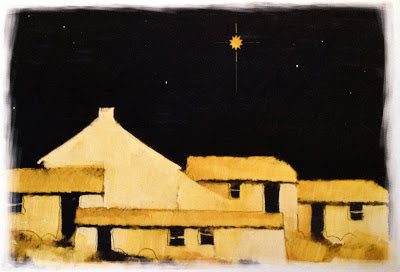 It’s Christmas time, and that means travel. The news is full of stories of road and rail chaos across the weather-battered UK as many of us make long journeys to see family and friends who live far from us. Deb is having to work Christmas week so we have just done our tour of the south and made it safely home again.

Visiting is just one of the journeys that people go on over Christmas: getting a tree (from the forest, or the attic), the big food shop, the multiple quests for presents, and the trips to the delivery centres to pick up the things you ordered online thinking you’d save time but which arrived when you were out. (Deb is missing at least one gift.)

Our travel problems are nothing compared to Father Christmas, though. Given the distance he has to travel, and the time he has to do it in, it’s estimated that he’ll need to keep up a speed of around 1,800 miles per second. This assumes he never stops: sleigh-mounted, GPS-guided, present-launchers will apparently be used. And, as the article I read said, “It will be probably also be advisable to have Santa catheterised to obviate the need for toilet breaks.”

The nativity story is the cause of all these journeys, and it’s full of travel too as angels and people move about all over the place. An angel is sent to a old man called Zechariah, to tell him that he and his barren wife are going to have a baby, who will prepare people for God’s rescue plan. Mary and Joseph also receive angelic visits as more news about the plans is delivered. Mary then goes to see Zechariah’s wife, Elizabeth, her cousin.

Somewhere in the east, wise men start to track and follow the movement of a star. Mary and Joseph have to go to Bethlehem, where Jesus is born. The angels get another stamp on their passport as they’re sent to announce this news to shepherds near Bethlehem, who in turn set off in search of the baby. Later, the wise men arrived, and soon after that, Mary and Joseph and Jesus are on the move again, fleeing to Egypt after yet another angel had visited to warn them they were in danger. Years later they return to their homeland, and begin to live in Nazareth.

Things settle down for the next 25 to 30 years. The family stays local, except for occasional visits to Jerusalem. “And did those feet in ancient times / Walk upon England’s mountains green”? No. Something much more amazing than that had already happened! There’s a lot of movement in the Christmas story, but it all revolves around and points to one entirely unique journey: God had moved to earth.

God came to earth, from heaven, and became like us. In heaven, He was worshipped, adored, obeyed, served; there was glory, peace, joy, and love around Him all the time. We sometimes get what we call glimpses or tastes of heaven, when everything’s going just how we want it to. That’s where Jesus lived, and that’s what He gave up to come here. On earth, He was mocked, misunderstood, rejected,  and He did the serving. He put aside divine strength and embraced human weakness, needing the help of others: a young couple still reeling from being chosen to raise God. The cold, the dark, became part of His life. Having watched creation happen, He now can’t see round the next corner. He gets hungry, thirsty, tired: God, on whom all things depend, took this on. He has come close to us, from a place impossibly far from us, experiencing life like we do. Why?

We hear the answer in the song which old, astonished Zechariah sang to his son John:


“And you, child, will be called the prophet of the Most High;
for you will go before the Lord to prepare His ways,
to give knowledge of salvation to His people
in the forgiveness of their sins,
because of the tender mercy of our God,
whereby the sunrise shall visit us from on high
to give light to those who sit in darkness and in the shadow of death,
to guide our feet into the way of peace.” (Luke 1:76-79)

This is the Christmas journey.

It answers our greatest questions. Is God real? Yes, He has shown Himself to us, walked among us. Is He powerful? Yes, He changed history like no other person before or since. Does He care? Yes, He didn’t come for Himself but for us.

God calls us to follow Him, a journey like no other. All that Zechariah sang, Jesus does. He is with us in the darkness of our ignorance, and suffering, and sorrow. He guides our feet, better than we ever would have imagined. He has given us the knowledge of salvation – true freedom – and forgiveness of all our rebellion and mistakes. He takes on us on journeys we could never have imagined with a guaranteed glorious ending.

If this has stirred your interest, Alpha was created for you to ask questions and see what Christianity is really about. Churches all over the world will be running it in the new year, maybe this Christmas will be the start of a journey of exploration for you.
Labels: Faith Jesus Reflections Travels