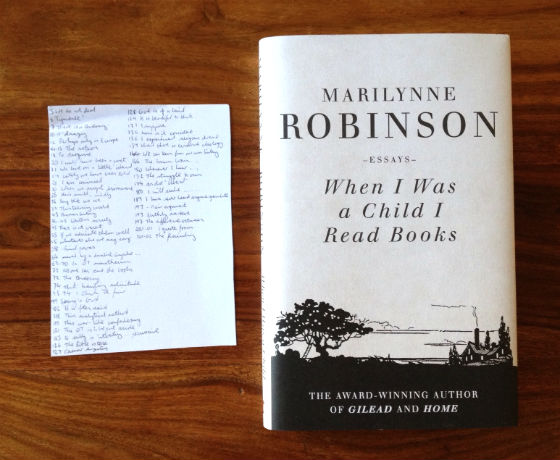 Here’s what it looks like when I make notes of everything I think good or interesting in a book by Marilynne Robinson. She is my favourite writer, I find what she says interesting and how she says it almost magical. Time and again I have the sense of someone who has thought deeply, to the exclusion of other quick distractions that many of us seem more attracted to. I imagine her seated at a desk with a large window and grand vista, found in thought. Because she thinks and writes at this alternative speed, I am helped and challenged to do the same.

When I Was A Child I Read Books reminded me of C.S. Lewis’s The Abolition of Man, with its disregard for simplistic solutions – in education and science particularly – that exclude true Christianity and thus negate humanity. New atheism and Tea Party politics are both on the receiving end of her quiet wrath, expressed through unpicking their arguments and curiously asking however it was that someone might think that way.

The arguments she makes in this collection of essays might not always be unique, but I have rarely read them made with such quiet, perfectly-arranged force. Pulling them from long arguments may lessen their impact, in which case you should just get on with reading the book, but here some of them are anyway.

She speaks passionately about the true goal of education:


“Lately we have been told and told again that our educators are not preparing American youth to be efficient workers. Workers. That language is so common among us now that an extraterrestrial might think we had actually lost the Cold War.”

“The human brain is the most complex object known to exist in the universe. By my lights, this makes the human mind and the human person the most interesting entity known to exist in the universe. I say this to my students because I feel their most common problem is also their deepest problem – a tendency to undervalue their own gifts and to find too little value in the human beings their fiction seeks to create and the reality it seeks to represent. By means direct and indirect this problem has been educated into them.”

“If we educate [our children] well, we give them the means to create a future we cannot anticipate. If we cheat them, they will have the relatively meagre future we have prepared for them.”

“[William Tyndale] wrote to the comprehension of the profoundly poor, those who would be, and would have lived among, the utterly unlettered. And he created one of the undoubted masterpieces of the English language.”

She makes the best argument I have ever heard against the imposition of life-wrecking human policies in the wake of the economic crisis:


“Eliminate the overwhelming cost of phantom wars and fools’ errands, and humankind might begin to balance the books. After all, its only debts are to itself.”

Robinson is a Christian, here’s beautiful summary of the Bible:

She is also a shrewd counsel for the defence. On Christianity and science not being at odds:


“We live in a time when many religious people feel fiercely threatened by science. O ye of little faith. Let them subscribe to Scientific American for a year and then tell me if their sense of the grandeur of God is not greatly enlarged by what they have learned from it. Of course many of the articles reflect the assumption at the root of many problems, that an account, however tentative, of some structure of the cosmos or some transaction of the nervous system successfully claims that part of reality for secularism. Those who encourage a fear of science are actually saying the same thing. If the old, untenable dualism is put aside, we are instructed in the endless brilliance of creation. Surely to do this is a privilege of modern life for which we should all be grateful.”

On atonement as divine child abuse:


“Why do I feel compelled to note that Jesus was thirty-three [when He did]?”

On the world having many religions not being evidence against Christianity:


“Perhaps only in Europe was one form of religion ever so dominant that the fact of other forms could constitute any sort of problem.”

On Old Testament law as cruel:


“The tendency to hold certain practices in ancient Israel up to idealised modern Western norms is pervasive in much that passes for scholarship, though a glance at the treatment of the great class of debtors now being evicted from their homes in America and elsewhere should make it clear that, from the point of view of graciousness or severity, an honest comparison is not always in our favour.”

I’m going to stop now but there's much more for you to find and think about. If you prefer fiction, maybe start with Gilead or Home.