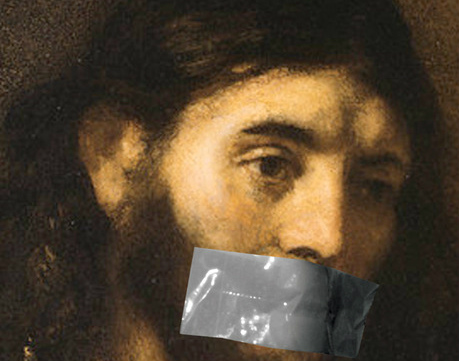 With its cover image provocatively combining a sensitive image of Christ and industrial tape over His mouth, and its opening line, “Jesus of Nazareth wasn’t afraid to tell it like it is. Those who claim to follow him, on the other hand, often are”, Phil Moore’s Gagging Jesus: Things Jesus Said We Wish He Hadn’t makes its intentions plain very quickly. What follow is fifteen short chapters exploring some of Christianity’s most controversial teachings (full list here), all from the mouth of Jesus Himself. This is a great approach to take because it refuses to allow readers to make the popular (false) distinction between what Jesus taught and what the “angry” God of the Old Testament or the “neurotic” Paul in the New say. If you’ve got an argument with Christianity about sex, judgement and hell, other religions, etc. then you’ve got an argument with Christ.

Too often Jesus is portrayed as a push-over, the nice guy who just talks about love in a way that is vague enough for people to claim His teaching as their escape route from anything in Christianity they don’t like. That ignores all the best evidence we have about Him. Phil give us the Jesus who turns over marketplaces, pronounces judgement, has arguments, pierces pretense, and demands total commitment from His followers. He mixes up the topics you’d expect in a book like this with more subtle challenges such as anger, family, and stress. This creates a well-rounded description of what matters to Jesus.

I’m really glad that Phil has written Gagging Jesus because it offers provocation and hope to everyone: it's a great introduction to Jesus for the curious or sceptical, and believers are reminded of who they are following and what that means for their lives. At less than 130 pages it can be read in a morning but would be more beneficial considered one chapter at a time, giving you time to think about what you've learnt. And at less than a fiver for a copy, it's a no-brainer bargain.

I tend to think that within Christian publishing there are plenty of books about things we should believe and do, and not enough about God Himself. I’m really glad to put Gagging Jesus alongside Incomparable by Andrew Wilson, The Good God by Mike Reeves, and The Master by John Pollock in a list of accessible God-focused books.
Labels: Books Good stuff Jesus