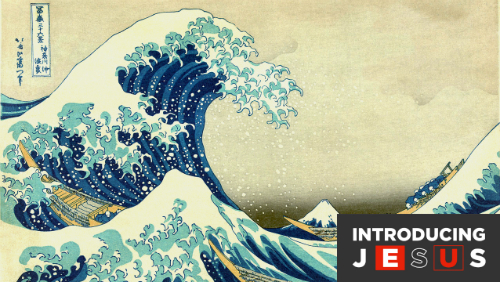 As part of our church's "Introducing Jesus" preaching series, I spoke on "Jesus the Storm Stopper" this Sunday. You can listen to it here.

Here are the edited highlights...

Mark 4: Jesus the storm-stopper The Jews among whom Jesus lived were primarily an arable people: they worked the land and had little access to the sea, which came to represent danger and chaos in their minds and in their writings (Genesis 1:2, see also Revelation 21:1). Of course YHWH, their God, made the sea and was superior to it, as He is over all creation, and He used His might to rescue Israel from slavery in Egypt (Exodus 14:21). This event would stay in the minds of His people as history and metaphor (Isaiah 43:2, Psalm 89:8-9, Psalm 107:28-30).

After a day’s teaching by the Sea of Galilee (really a lake), Jesus instructed the disciples to take Him over to the other side. Storms can arrive suddenly because of the local geography, and they were in serious trouble. When they wake Jesus, He doesn’t help out with the bailing, and more significantly He doesn’t pray: He speaks to the wind and the sea, telling them to be still – and immediately they obey. And it turns out there is something scarier than being in a little boat in a raging storm: being in a little boat on a calm sea, with Jesus.

His reaction seems harsh, “Why are you so afraid? Have you still no faith?” He’s indignant because at the start of the journey He said, “Let us go over to the other side.” He didn’t say, “Let us go down to the bottom of the sea” and it seems that for Him, a massive storm shouldn’t cause His words to be doubted. Whatever He sets out to do, He does: bringing comfort to the troubled, and trouble to the comfortable; healing to the sick... even rising from the dead on the third day after His execution. He calls us to believe Him, to have faith in what He has said, even when storms are raging. Why does He have this confidence, why should we?

The disciples are so afraid when Jesus calms the storm the are Jewish men, brought up to know the stories and songs of the Old Testament about God (see above). They know that what Jesus has just done, only God can do. This episode is one of many which caused Jesus’ first followers to realise who He really is:


Those who say that Jesus never claimed to be God haven’t read or understood the earliest and most trustworthy accounts of what He said and did. As we’re introducing Jesus we have to say, “He is God. God exists, and here He is.” It’s a staggering claim, which deserves careful consideration and takes time to digest.
Jesus being God challenges us, whatever we believe. It opposes the common view in our culture that Jesus is a shadowy figure from history who has influenced the past but is irrelevant now. It should also shake Christians out of the tempting mistake many make to place themselves at the centre of the world.

The Bible often says, “Don’t be afraid,” but it also says, “Fear God”. We live in a culture which says you shouldn’t fear anything, because we’ve put all our trust in ourselves but we do fear things, because of their perceived power: illness has the power to cause us pain and sorrow, social pressure has the power to isolate and embarrass us, a stormy sea has the power to drown us. But what if there was a person greater than those things, who came in to the world to take on the greatest of our enemies, sin and death, and totally defeated them? That strength and authority should provoke awe and wonder in us, and a certain kind of fear - but not terror. Fear and delight can coexist when you know that the mightiest one is for you. For the disciples, fear of waves and wind was replaced with fear of Jesus, a different kind of fear: one threatened them with death, the other offered life; one was an enemy, the other was their friend. That’s what it means to fear God.

What is frightening you, and how does Jesus match up to it? The worst thing the disciples could have done when the storm hit was to jump out of the boat, take their chances by themselves. Thoughtlessly as we just rush to fix everything ourselves, or intentionally in the pain of feeling that He has let us down by allowing this storm to come. But God has come into the storms of this world to save us. At these moments, fear and faith combine to help us make great choices to trust our powerful, faithful, caring God.
Labels: Faith Jesus Talks