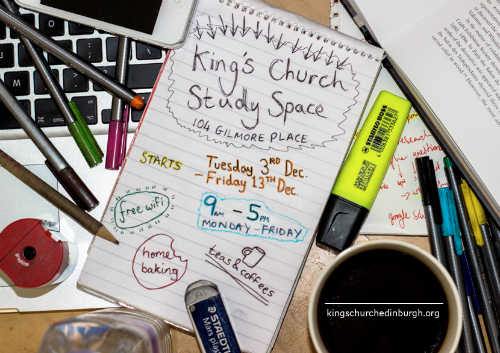 We've been using our church building as a study space for students in the city, with free WiFi and hot drinks. There's a room that's intensely quiet, and another which is more café-style and slightly less efficient for study, it seems.

Want a mashup of 2013's pop? DJ Earworm always delivers the goods. What about 2014? The boys at Sounds Good To Me Too and a bunch of other blogs have made their non-pop recommendations. I liked Iyes and Rhodes.

Some scientists have declared that the virgin birth of Jesus is impossible. Derek Rishmawy is suitably unimpressed.

Could you build a house that looks like something from The Shire for £150? Michael Buck did.

How can a leader change someone's life? Sam OklahomaPK tells his story.

"Hardworking families" is one of the worst phrases in politics, as Ed West points out.

Dave Morris sounds another cry for the preservation of Scotland's wilderness.

The church Deb grew up in has made a Lego nativity.

How many of the Internet Movie Database's top-250 ranked films have you seen? I'm on 82.

As my friend Sam said, it's difficult to know what's more impressive about this goal: the lob, or the fact that Paul Scholes made a clean tackle...