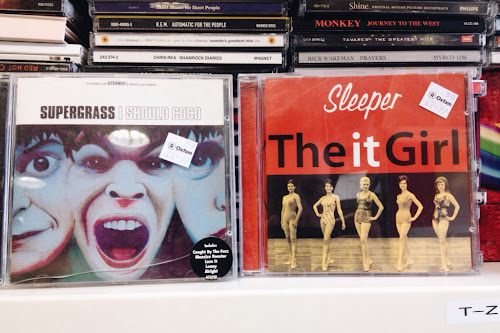 For those who want to mark it, Britpop is being celebrated as 20 years old. It was the music of my teenage life, so please allow some nostalgia.

What made it so special for those of us drawn to guitars was that the other kids, who usually laughed at us, were now listening to the same music as us*. Songs only we knew were suddenly all over Radio 1, no longer just the Evening Session with Steve Lamacq and Jo Whiley - however essential that remained - but throughout the day. It felt like a vindication, which is surely what adolescents long for, so we had a new sense of superiority to the late arrivals: no longer were we right and they wrong, but we were right first.

The long hot summer of 1996 felt like the peak of it, happily coinciding with the completion of our GCSEs. Jarvis Cocker was the wisest and funniest man in the world. Damon Albarn and Justine Frischmann would be together forever. Camden was Mecca. Chris Evans woke us up every morning with Wake Up Boo by The Boo Radleys, made us wait in the pause of The Longpigs' She Said for a joyful eternity, and introduced every guest on TFI Friday with Ocean Colour Scene's Riverboat Song riff repeating ad infinitum.

With the simultaneous excitement of newly-allowed liberty, we went out into the night accompanied by Dodgy's celebration of Staying Out For The Summer, and we hoped the bouncers would let us in to the local indie club that hosted so many of our new-found heroes. Whilst the DJ played Kula Shaker's terrible Tattva we pushed our luck at the bar, and all the girls wore velvet jackets. Then Girls and Boys would start and the dance floor became a happy riot as we bounced in our Doc Martens.

There was nothing aggressive or intimidating about it: the snarl of punk and the politics of much independent music from the 1980s were only to be heard on Radiohead albums, which should be considered in a different category and class. The Manic Street Preachers still had Orwellian angst and earnestness but Richey Edwards and his outsider anger had literally disappeared. Kurt Cobain's more obvious suicide caused a flinching away from nihilism. The swagger of Oasis was mostly comical and the socialism of Common People was easily misappropriated. This was a middle class movement, wryly amused and cheerfully hopeful, with just enough irony to keep itself in check.

The 20 year celebrations have tried to make it more important than it really was. Of course there was the Downing Street reception but that speaks for itself. The best the BBC seem able to come up with is that it changed the media. I might have cared then, still eager for vindication, but not much of it has stood the test of time, musically or sociologically. There is still, however, the instant hit of the memory of music that felt truly ours.