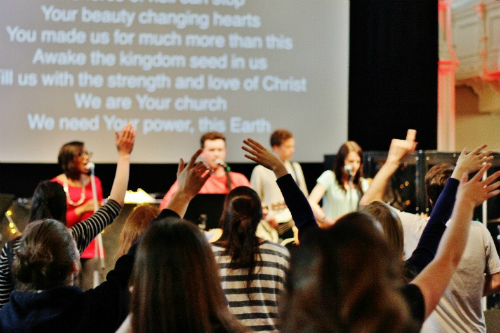 Last week a load of students from King's and other churches in Edinburgh got together to do some good to the city they study in. To make matters even better, I was away the entire time and barely had any input in the months of planning other than to keep saying: "This sounds great, go for it." That is the leadership dream and I'm so proud of all of those who made it happen. Here's a report from my friend Nathanael on what went on:


On the final morning of 10:8, the preacher spoke about living more radically for Jesus than we ever have done before, and to take the evangelism of this one week and make it our lifestyle. Afterwards, there was a call to response that involved coming to the front and kneeling in prayer, to say yes to this call to radical living and a life full of evangelism. Every student there came forward. This hunger to live for God and to share the gospel characterised a week of outreach dedicated to Jesus’ command: “Freely you have received; now freely give.” [Matthew 10:8, you see] For one week, over forty students from five different churches across the city gave up time and money to give out to the city from everything that God has given them. By the end of the week they had all committed to living this way week in, week out.

Each morning all the volunteers came together for worship, prayer and preaching. We wanted to focus on God and be filled with His power before ever setting foot outside. As people from loads of churches joined together in one cause, there was a strong sense of unity – a feeling that was strengthened by eating and socialising together. After a while, “Which church are you from?” became an increasingly irrelevant question as friendships grew between the volunteers. Songs that declared “We are Your church” took on new meaning as it was sung in unity.

After lunch, four teams went out to various parts of the city to give back to the city. The RESTORE team spent their afternoons in Saughton Park working with the council to clean the park up a bit, trimming hedges, laying woodchips and cutting back overgrown paths. The council employees who worked with them were fascinated by the concept of 10:8 and were daily impressed by the speed and enthusiasm with which they worked. The GO team prayed at the start of each afternoon and then went out on the streets offering prayer for passers-by. One woman with Multiple Sclerosis walked out of her wheelchair after four students prayed for her, and there were testimonies each day of healings and people responding to offers of prayer. The CARE team went into elderly care homes and put on concerts of golden-oldies before joining the residents for afternoon tea. They were universally a hit with the carers and those who lived there. One of the days they did ‘gardening’ for a care home which ended up being heavy manual labour and serious root excavation. Without a word of complaint they got stuck in and did half a year’s work in an afternoon.

The GENEROSITY team were responsible for the big finale to 10:8. Their job was to put on a feast at the end of the week that everyone in the city would be invited to. With a budget smaller than their reach and a vision to see Luke 14:12-14 happen in Edinburgh, they had a huge task on their hands. They went round the city handing out flyers and asking for donations from local businesses to make the feast a reality. Friday night came round and Central Hall was buzzing with anticipation and nerves. What if no one came? What if too many people came? Before the evening had officially started, people started coming in from the street, and before long the room was full of people, each of them asking “Why are you doing this?” By the time the evening had finished, 134 guests had been fed, and each one of them had talked about God with one of the volunteers. After the last guests had left, the feeling was one of relief, sadness and anticipation: relief that the evening had gone really well, and that God had been there and been glorified; sadness that the week everyone had enjoyed was over; anticipation for the future, as 10:8 was just the start of something much bigger. 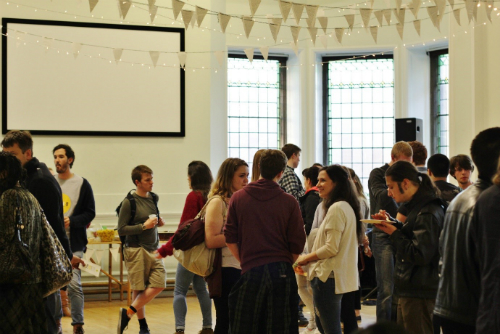