Just read: Can I Really Trust the Bible? 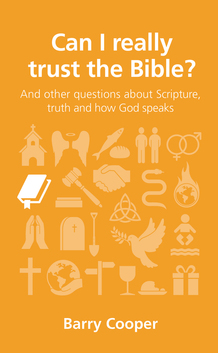 Can I Really Trust the Bible? is part of The Good Book Company’s “Questions Christians Ask” series. This title is clearly a question asked by people who aren’t Christians too but the tone of this book seems primarily aimed at people who have both faith and uncertainty, and wish for more of the former and less of the latter.

Barry Cooper claims to be inspired by the investigative reporter Winnie-the-Pooh, who, upon discovering a jar which claimed to contain honey, was not satisfied to leave the matter at that:


It had HUNNY written on it, but, just to make sure, he took off the paper cover and look at it, and it looked just like honey. “But you never can tell,” said Pooh. “I remember my uncle saying once that he had seen cheese just this colour.” So he put his tongue in, and took a large lick. “Yes,” he said, “it is. No doubt about that.”

At under 100 pages long, the book’s brevity (and price) makes it an attractive place to start exploring this vital topic. For those who want their questions answered in greater depth, and with more focus on a non-Christian’s perspective, Amy Orr-Ewing’s similarly-titled and similarly-brief (144 pages) Why Trust the Bible? is an excellent alternative. Where Cooper is strongest is when his love and enthusiasm for God’s word is on display, which it is on most of its few pages.

It also has a promo video which made me smile...