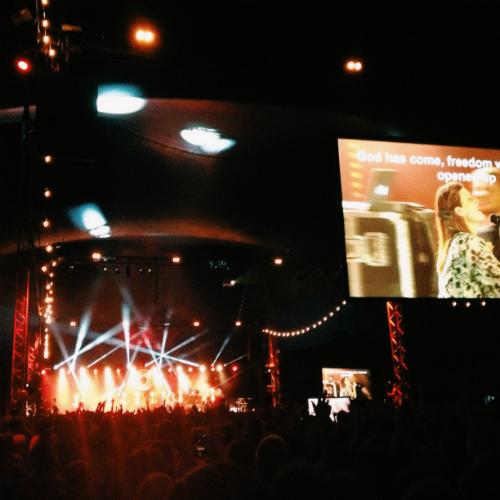 Driving through the flat farmlands of Lincolnshire and Norfolk, the only buildings you’re likely to see from a distance are the old churches. In every village a spire rises, once the reference point and source of hope for all around, now more likely to attract pilgrims of local history and architecture. Past many we drove until something different broached the horizon: a blue Big Top, put up to accommodate 6,000 teenagers who were gathering to hear about and worship Jesus. Newday

My relationship with Newday goes deep but had become distant, moving to Scotland put me nine hours’ drive away from it and signalled the end of a certain level of involvement. Having attended every one since its inception in 2004, this was the first time I had made the journey in four years. A joy of the new and the nostalgic stayed with me for the whole event: innovations and improvements were everywhere, and so were many friends I hadn’t seen for so long. Memories of nearly being washed away in record-breaking downpours, of working together to organise a careful response to hundreds of kids rushing to commit themselves to God, of singing and chatter and laughter and ubiquitous acoustic guitars and footballs hitting tents and bleary-eyed morning greetings.

God never wallows in the past, however good it is. So I had the pleasure of seeing Him bless more lives in ways of His that are both new and timeless. Salvation, healing, challenge, comfort, community. The music moves on, making me feel slightly old but grateful that the songwriters here buck a current trend of celebrating ourselves to the marginalisation of God. Similarly the core team of leaders stay committed to God’s truth and explaining it in ways that connect but never condescend. As one of them put it, “we’ve heard terrible and glorious things.” I agree with Andrew Wilson's more detailed summary.

The response to all this begins at the event. Every afternoon, hundreds of young people poured out across the county to bring hope to its towns and villages, to those not fortunate enough to have been to something like this. In God’s grace, He brought it to them. The plans and commitment went further abroad: over £140,000 was given by these young people to plant and build churches across the world.

By a quirk of train routes, on my way home I passed four great cathedrals, each catching the eye despite the buildings around them, and wondered what foundations were being laid in a field near Norwich.