Yes or No, and More or Less 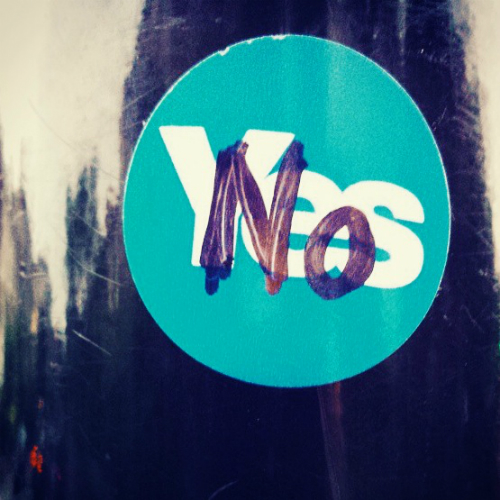 Firstly, the articles I think you should read instead of this one:

For my own thoughts – well, where to start with something as large as a nation’s destiny and as small as nationalism?

Much of what I’ve observed in this debate has frustrated me, as both sides have made poor arguments (Of course Scotland can exist by itself as a country - there are many much smaller and poorer which do. Of course Scotland cannot default on a shared burden of debt if it is ever to be taken seriously by the rest of the world and its bankers.) I think that the Yes campaign has often been deceitful, and Better Together has often missed the point by failing to explain what the union has been and can be in terms other than economics (Tom Holland does a good job of that).

What has troubled me most is the divisiveness that the independence campaign has been built upon. The referendum gives Scots the opportunity to define themselves by division (however anachronistic they might want to declare the union to be). It’s ironic, from this perspective, that Yes campaigners present Scotland as diminished and limited by the union when in fact the opposite has been true. It is to Better Together’s discredit that they haven't told this story more effectively: that so much of what is great about Scotland has been revealed in and by the union, what Scotland has given and what it has received. I fear for anyone - and any nation - who cannot see that they need others. Humility and interdependence are marks of wisdom and greatness, and they are usually rejected by nationalism.

On a personal level, independence for Scotland will force me to define myself incorrectly, should I need to describe my nationality. "British" will no longer be an answer. But like so many in these islands, I am a happy mongrel, my mixed blood hailing from Ireland, England, Scotland, Cornwall, and Lithuania. No single one of those terms is sufficient, whereas "British" contains a breadth of possibilities wider even than my needs. Not only does it have space for me, but there is room for many others whose stories are different to mine. This, again, is the price of division: Scotland's citizens will be able to reduce how they and those who live among them can be understood, they can cut themselves off from the peoples they have mixed so well with.

Among all this, and the much more that has been written and shouted, how does a Christian vote?

I don't think there's an argument that can be made one way or the other that is decisive for a Christian. I’ve heard someone suggest that the unity/diversity/equality of the Trinity is echoed by the union. A less persuasive case is that the scattering of the nations at Babel (Genesis 11:9) is best obeyed by the United Kingdom fracturing. Some Christians up here are suggesting that they could have more influence on Holyrood than Christians presently do at Westminster but I’m not convinced that this is would be the case, especially with the currently-unique growth of church size and influence in London.

Most importantly, as a Christian I am a foreigner wherever I live on the earth as it presently is. I may be about to feel that more acutely, but the Bible describes me as a “stranger and exile” (1 Peter 2:11) until Jesus returns, and instructs me that my “citizenship is in heaven” (Philippians 3:20). My loyalty is not to any land or lord, but to the Jesus Christ the Lord of all, and He is where all my hope is too. Furthermore, He has instructed His follows to share the news of this great hope with everyone, so a passage from the Bible which closely links this command with day-to-day politics has been shaping my thinking and praying:

“First of all, then, I urge that supplications, prayers, intercessions, and thanksgivings be made for all people, for kings and all who are in high positions, that we may lead a peaceful and quiet life, godly and dignified in every way. This is good, and it is pleasing in the sight of God our Saviour, who desires all people to be saved and to come to the knowledge of the truth.” (1 Timothy 2:1-5)

So that’s what I hope for: whatever brings about this peace that benefits the advance of the gospel. I cannot know which option will, so I pray and vote with faith that God will work whatever happens to His advantage.