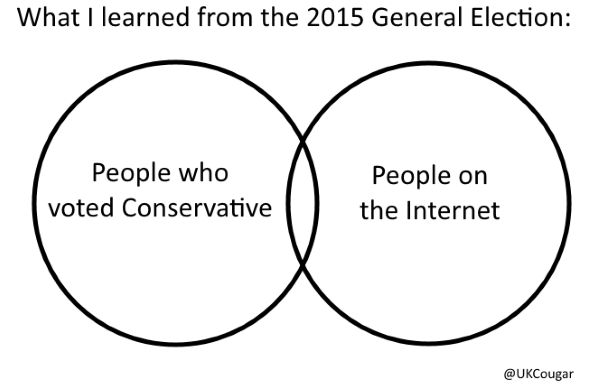 The diagram above represents the views of many people I know, and realising this should help many of us grow up a bit. Social media is a great enforcer of prejudice: we supply ourselves with a steady stream of content we already agree with, plus occasional horrified links to Terrible Things That No-one Like Us Would Like (usually from the Daily Mail or Crazy America). Satirical website The Onion nails it. This is a childish way to behave: it encourages self-satisfaction, and the demonization of those who are different from us. It’s also profoundly intolerant, when you think about it. I like being agreed with as much as the next person, so I force myself to read well-written articles that I might not like in order to understand other viewpoints and maybe learn something. News digest magazine The Week is excellent for this, I also follow the Spectator and New Statesman blogs, and of the daily newspapers I think The Times has the best standard of writing and broadest range of opinion - some of which I strongly dislike.

Part of the reason I say this is because I know good people who voted for Ukip*. Raised eyebrows always follow my mentioning this, sometimes accompanied by gasps of astonishment. I have to admit that anti-immigration rhetoric gets me more angry than most of the other policies I disagree with across the political spectrum. This is because I wouldn’t exist if this country didn’t let immigrants like my granddad in. He came here to escape, he came without skills, and Britain welcomed him in. That’s greatness. Many people, probably most, have one issue that is especially emotive for them – it’s understandable that this could define their perspective on everything else, and it shouldn’t be surprising that some of these will be different to what matters to you, or even what you believe to be right.

Talking of personal narratives and the power they have, I didn’t see many of the victory speeches on election night but two of them were almost identical. Both successful candidates recalled how they were the first in their family to go to university, and that their educational and career success had grown in them a love for Britain as a nation of opportunity, and caused them to get involved in politics so that others could benefit as they had. The only difference was the conclusion they made from their life stories: one was Labour and one was Conservative. Each saw the same journey as justification of a totally different political perspective.

Are matters more black and white in Scotland? I’m not sure that they are. The SNP are geopolitically blessed in a way that Ukip and the Greens can only dream of, yet voting for them is not exactly the same as wanting (full) independence. Brian Taylor explains:


“People in Scotland have been looking for Scottish champions. They have sought politicians who would evince the Scottish standpoint, who would strengthen the Scottish voice in the UK and global discourse. They have sought politicians who owed their allegiance, primarily if not solely, to Scottish concerns... That demand is inchoate and imprecise - in that it is not pegged directly or solely to a demand for particular devolved powers or a particular economic strategy. It is, nevertheless, powerful and all-consuming. Perhaps all the more potent in that it is wide-ranging, rather than narrowly driven. It is an aggregate feeling of remoteness from the concerns of a metropolitan elite, a feeling of physical and cultural distance from the Westminster centre of UK political life. A shout of anger, a yell of anguish, a demand to be heard.”

The nationalists have been in a great situation for a while: devolution has allowed them to claim that any success Scotland experiences is due to them being in government here, and any failures are the fault of Westminster. Heads “we” win, tails “they” lose. It will be interesting to see whether the new UK Government gives it enough financial rope to hang itself. If this were to happen, the charismatic Ruth Davidson could make the Conservatives the party of opposition. Weirder things have happened, although not many.

My mother-in-law has encouraged us that we may be able to take the title of “foreign missionaries” soon. Apart from that, how do I respond as a follower of Jesus to everything that’s going on? I’m content that Jesus is ultimately in charge, a situation that isn’t affected by who currently occupies 10 Downing Street or Bute House. Political paranoia seems unbecoming for people who have assurances as great as ours, however serious the present difficulties.

What should matter to a Christian voter? One organisation will tell you how your MP voted on "moral" issues that have been debated in parliament, but not on issues of justice and welfare, which even a cursory glance at the Old Testament will show matter a great deal to God. Thankfully, many churches have responded with great compassion and help for those in deep trouble, from establishing foodbanks and debt advice centres to taking on loan sharks and even the government. There will probably more pain ahead, and "the poor you will always have with you", so each of us should look to do what we can to help others. This is far better than posturing, as Libby Purves scathingly points out:


“The most savage, bilious, self-righteous rants are from people living affluent self-pleasing lives in comfortable homes, doing lucky and rewarding jobs with like-minded friends. What they are doing (I risk losing a friend or two) is ‘virtue-signalling’: competing to seem compassionate. Few are notably open-handed: St Matthew would need a rewrite of Chapter 19. ‘Jesus said unto him, If thou wilt be perfect, go and sell that thou hast and give to the poor. But when the young man heard that saying, he went away sorrowful, for he had great possessions. So he went on Twitter instead and called Michael Gove a ‘vile reptilian evil tory scumbag’, and linked to a cartoon of Iain Duncan Smith stealing a paralysed woman’s wheelchair. And lo, he felt better and went for a £3.50 caramel macchiato with some mates from the BBC.’”

Talking of Matthew 19, the Bible verses that spring quickest to my mind are the same that did last week:

“First of all, then, I urge that supplications, prayers, intercessions, and thanksgivings be made for all people, for kings and all who are in high positions, that we may lead a peaceful and quiet life, godly and dignified in every way. This is good, and it is pleasing in the sight of God our Saviour, who desires all people to be saved and to come to the knowledge of the truth.” (1 Timothy 2:1-4)

“Let every person be subject to the governing authorities. For there is no authority except from God, and those that exist have been instituted by God. Therefore whoever resists the authorities resists what God has appointed, and those who resist will incur judgement... Pay to all what is owed to them: taxes to whom taxes are owed, revenue to whom revenue is owed, respect to whom respect is owed, honour to whom honour is owed. Owe no one anything, except to love each other, for the one who loves another has fulfilled the law.” (Romans 13:1-8)

That last one sounds a bit crazy, doesn’t it? It sounds even crazier when you know that Paul was referring to the Emperor Nero, whose crimes against Christians were many and horrible, and when you consider how much trouble Paul’s declaration that Jesus was Lord had got him in. King’s Church Eastbourne are currently doing a teaching series called Citizens and the first talk deals with this passage more comprehensively than I can here. Just one thing, though: it's funny how we think it's hard to be subject to rulers (verse 1) and easy to love everyone (verse 8). As always for Paul, real love must triumph. No government can stop me living this way, nor can any fellow voter’s preference.