I don't want to live in a world like Jurassic World 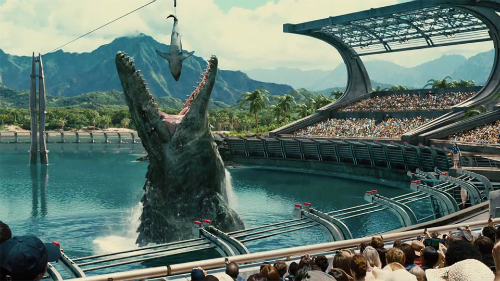 We don’t know much about her but we know that she’s called Zara and she is engaged. A throwaway line in an earlier plot device told us that. Zara is about to be discarded from Jurassic World altogether but she has one more use to serve. For a prolonged period she is thrown about from one flying dinosaur to another before she falls into a massive pool from which we’ve earlier seen an enormous swimming dinosaur leap up to eat a dead shark. Now she is in the pool. The swimming beast does not appear, yet, because anticipation heightens the entertainment, so Zara is left to splash and scream until she is picked up again by another flying dinosaur and taken, desperate, into the air once more. Now the climax comes as out from the water the aquatic beast leaps, devouring both her and her winged assailant, for comic effect. The movie moves swiftly on.

I don’t see many blockbuster movies but all those that I do have put creative effort into imagining how people could be killed. Shouldn’t we find that odd?

Early in Jurassic World, the owner of the titular theme park describes how he has created it in order to humble people, for them to see how small they/we are in the story of this planet and for them to sense the fear that comes with not being at the top of every food chain. The amorality of survival of the fittest is at work here. Zara is treated with similar contempt by the film makers. I had to look up her name, whereas the pteradons and mosasaur are namechecked repeatedly; her death serves no moral purpose, it’s just meant to be funny.

As I walked from the cinema troubled by this, I thought about The Lord of The Rings. Peter Jackson’s original film trilogy had chart-toppingly high death counts (though he might counter this by saying that many of his casualties were non-humans). His source text didn’t flinch from death but didn’t luxuriate in it either. Here’s how the death of one unknown enemy combatant is treated in the book The Two Towers, as seen through the eyes of the character Tolkien takes us deeper into than any other, Samwise Gamgee:


“It was Sam’s first view of a battle of Men against Men, and he did not like it much. He was glad that he could not see the dead face. He wondered what the man’s name was and where he came from; and if he was really evil of heart, or what lies or threats had led him on the long march from home; and if he would not really rather have stayed there in peace”

I think that Tolkien has returned here to the trenches of the First World War where he fought. He had seen death and did not like it at all. His humanity was informed by his Christianity and, although he was a Catholic and no doubt disagreed with much that John Calvin wrote, he would surely have agreed with this from The Institutes of the Christian Religion:


“[W]hatever man you meet who needs your aid, you have no reason to refuse to help him. Say, ‘He is a stranger’; but the Lord has given him a mark that ought to be familiar to you, by virtue of the fact that he forbids you to despise your own flesh. Say, ‘He is contemptible and worthless’; but the Lord shows him to be one to whom he has deigned to give the beauty of his image… Say that he does not deserve even your least effort for his sake; but the image of God, which recommends him to you, is worthy of your giving yourself and all your possessions… Assuredly there is but one way in which to achieve what is not merely difficult but utterly against human nature: to love those who hate us, to repay their evil deeds with benefits, to return blessings for reproaches. It is that we remember not to consider men’s evil intention but to look upon the image of God in them, which cancels and effaces their transgressions, and with its beauty and dignity allures us to love and embrace them.”

When we consider what western culture is forfeiting as it discards Christianity, this is surely near the top of the list. We become beasts.
Labels: Movies Reflections