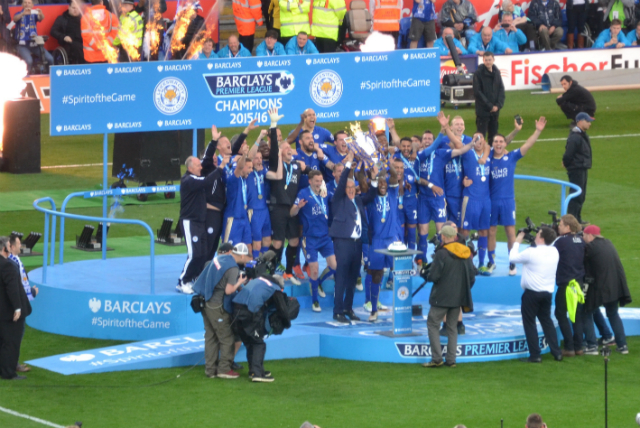 Best league table
The may have played mind-numbingly uninspired football, only able to win three consecutive league games once all season, and seemed perpetually on the verge of disaster, but actually Manchester United were the most efficient team in the Premier League! Tom Bryant has put together a table of who, according to OPTA’s stats, made the fewest mistakes. And unlike almost every win in their season, United didn’t just scrape it or ever look like throwing it away, they romped home a full 14 points ahead of their nearest rivals. Louis van Gaal may find some vindication in this, I wish United would find another manager.

Unsung hero
Like the referee, a football is only noticed and commented on when people aren’t happy with it (cf. every international football tournament in the past two decades). Some credit should be due, therefore, to the Nike Ordem 3, which has been used to score some wonderful goals this season. Whether it’s the “Visual Power Graphic” which helped players “see and react to the ball faster”, or the “Aerowtrac grooves and micro-textured casing” which delivered “accurate flight”, the “use-welded, synthetic leather casing for optimal touch and maximum response”, or the “six-wing carbon latex air chamber for explosive acceleration and superior air retention”, it got kicked around really well.

Best kit
Stoke City occasionally played some of the best-looking football in the league, but they always looked good in their monochrome home kit. There was a pleasing simplicity about the whole thing, even the New Balance and Bet365 logos were a good fit, however much I hate betting’s insistent relationship with football. Of course this kit has already been replaced. Not long ago there was outrage when a club changed their kit design every two years, now they just quietly get on with an annual redesign and no-one seems to mention it. All the more reason to choose something rather more retro from the likes of Toffs or Kitbag.

Best commentator
I barely watch any games live on TV, so the field is restricted here. Radio Five Live have enormous strength in depth, but when Match of the Day is on I’m always happy to hear Steve Wilson's voice. He manages the tricky combination of being simultaneously descriptive and atmospheric: “Here's Martial, getting going, and when he gets going he glides”, “Mahrez... Fantastic Mr Fox!”

Best punditry
The small doses of Michael Owen I’ve experienced are enough to astound me that anyone would pay him money to talk. I’m constantly impressed by the self-control showed by the likes of Mark Chapman when they ask an interesting question to an ex-pro and get an uninteresting answer to a different question in reply. Perhaps unsurprisingly, I’ve preferred listening to people who have been trained to write rather than those trained to play football and The Guardian Football Weekly podcast, hosted by James Richardson is often funny, and usually interesting and insightful. Everything there is seen through a slightly cynical lens, but perhaps that’s how it should be.

Irony of the season
This award is given to two equally-deserving causes: Manchester United fans wanting to replace an arrogant, defensively-minded control freak coach with Jose Mourinho, and Arsenal being fourth on Groundhog Day. Their finishing second is absolutely irrelevant to this being funny and indicative of a team who don’t know how to win a league, who have cracked every time the pressure of actually winning the thing has been on them in the past decade. For all the good he has done the club and football in this country, Arsène Wenger seems incapable of changing this.

Overturned wisdom of the season
Ex-players who got shouted at a lot, and then went on to be the ones doing the shouting, like to say that there aren't leaders in football anymore. They’ve had ample evidence to support this, and the still-fresh memories of the Class of '92, the Invincibles, and Mourinho’s first Chelsea back them up. Footballers today are pampered and overcoached, unable to think for themselves or take a game by the scruff of the neck. This has been proved nonsense by Leicester, and a supporting cast of other “middle-ranking” teams. Of course it isn’t easy to create the necessary amalgam of autonomous initiative-takers who submit themselves to a team plan but it isn’t a thing of the past.

Most disappointing celebration
“Picking the ball out of the net and carrying it back to the halfway line with an urgent look on your face” is the new “Not celebrating against your former team.” If you’ve grabbed one goal back  and need another in the 85th minute this is an understandable response to scoring. In the 35th minute, it isn’t.

Best celebration
You can't beat Nessum Dorma, and barely anyone could beat Leicester…