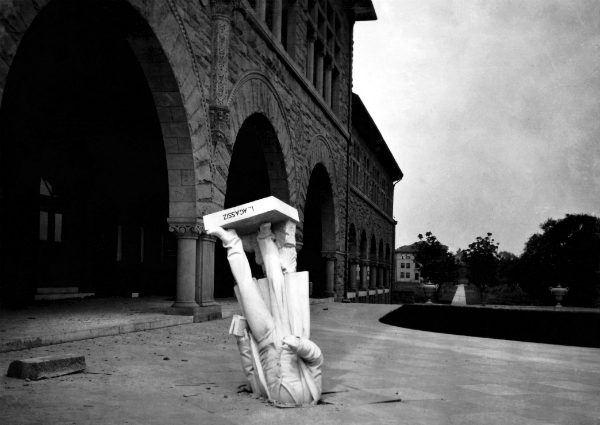 “We don’t know anything yet” was the mantra of every person I saw on the BBC’s referendum results program until I went to bed around 1am. A week later and the confession still holds true. The dust won’t be settling for a very long time, and nobody really knows anything apart from that.

Politics makes this most plain at present. If I had written this a couple of days ago, I would have confidently predicted that Boris Johnson was well on his way to be Prime Minister, and flourishing a line I’d come up with about him seeming to be a man with the bonhomie of a minor Wodehouse character and the ambition of a Shakespeare villain. Instead, in a speech that included a quote from Julius Caesar oft mulled upon by Jeeves and Wooster, he announced that he would not be running for leadership of the Conservative Party. Michael Gove has shown himself to be a Brutus.


We can’t be entirely sure what all this means for the country except for a prolonged period of political uncertainty, which usually leads to economic instability, which can cause social upheaval. But that’s probably upon us already, isn’t it? It has been since at least the start of the financial crisis in 2008, depending on who you are and where you live. No wonder millions laughed with Gove when he derided expert opinion during the campaign - experts had caused this mess but not suffered its consequences.


We can’t fully know ourselves, either, especially if we are delighted or distraught about the result. For those who voted to remain, your social media echo chamber will not have prepared you for this because it actively works to put people in front of you who are like you. Alan Martin wrote about this in 2013 and his article is helpful if you want to develop your online self-awareness. If you don’t know anyone who voted otherwise to you, you can’t understand their motives and are thus at liberty to characterise them with your worst suspicions. John Harris was one of a very small number of writers who was prepared to listen to people radically different to him and his world. John Stevens, in what is probably the best summary and conclusion I've read, has examined this from a church leader’s perspective, coming to the unarguable conclusion that “contemporary evangelicalism is predominantly middle-class, well educated, wealthy and southern, and this ought to be a scandal to us.” (As a side note, this result has dealt a powerful blow to my confidence in Timothy Keller’s assertion that where cities lead, the culture follows.)


If your conclusion from this is to read more broadly, you could start by browsing Alan Jacob’s collection of articles giving various perspectives on what has happened / is happening / will happen. But even then, those are all written by and for the well-educated. I used to think I was diverse in my reading of British politics because I’d look at both the Spectator and New Statesman, but really I’d need to start reading tabloids for this not to be a claim of extreme naïveté. (On the terrible tone of the media throughout all of this, Ian Burrell’s explanation of why newspapers act the way they do is insightful.)

If you are upset, you can't be sure who to blame (not that it will help you). A howl of youthful protest against the selfishness of the old was muted when it was discovered that less than half of all 16 to 24-year-olds voted. Rupert Murdoch wanted this result, but Scotland's edition of the Sun did not support Brexit because it knew the nation disagreed, which gives caution to an accusation of almighty media. You can blame Nigel Farage for lying, Jeremy Corbyn for not trying, Boris for flying by the seat of his pants, the EU for supplying plenty of ammunition to be fired at it, but really it's more complicated than any of that. Writing from his own perspective as an accepted, educated immigrant, Tunku Varadarajan is persuasive that the vote to Leave is understandably British. His key point, and I suspect my immigrant grandfathers recognised this or at least subconsciously acquiesced to it in a way that other migrants haven’t, is that Leave voters “want those who are in their midst to show that they belong. They want proof.” To more fully understand the history of immigration and Britain, I recommend Bloody Foreigners by Robert Winder.


Why face-palm man had his head in hands pic.twitter.com/jnk03yUjYs
— Colette Browne (@colettebrowne) June 29, 2016


Scotland’s future seems slightly clearer if no less complex: independence will be the focus once again. The SNP’s cake-and-eat-it playbook is already in full force: for 2014’s shared pound / BBC / Queen, read 2016’s EU membership and an open border with England that no immigrant-phobic country would allow. Chris Deerin is one of many who voted No in 2004’s referendum but is now open to having his mind changed. If the Britain you wanted to be part of isn’t there any more, what ties are there left to bind you? (I make no mention of Northern Ireland because I know even less about that situation, but let’s be praying for peace.)

I have sympathy with Deerin’s position, a feeling of dis-location. I have always considered myself to be British, and by implication European – what I am used to this meaning will cease to be an option. I feel a sense of loss that I can only partially define, the sentiment that played such a strong part in me voting to Remain (just as sentiment motivated many to vote Leave). This is perhaps no bad thing for a Christian whose ultimate allegiance is not to this earth at present. Charles Spurgeon spoke to the Victorians about how God sometimes shakes everything so that we see what cannot be shaken and trust in that alone. With this in mind, a Christian’s reaction to the chaos around us should be much more restrained and loving, whichever way we voted. Making prophetic statements about political events is best avoided because it's too easy to get wrong and tarnish Christ's reputation. Remember that a lot of what you read will be written by people who have no hope beyond this life. I helped write advice to the members of King’s Church Edinburgh, and I appreciate Terry Virgo noting the parallel between the consequences of this vote and Paul’s grace to those who forced him into a storm.


As I woke up to the news last Friday morning that we did know something now, that Britain had voted to leave the European Union, I put together a list of Bible passages that I considered helpful – truths that could be known, whatever else was unknown. If you want to follow Christ through all of this, you are going to need to spend more time reading His Word and praying than you do reading the news and sharing opinions. What you read may confront you at first, jarring with how you are feeling, what you are experiencing, what matters most to you currently, and how you want life to be. It’s good to realise when the truth does that, to confess it to God and talk with Him about what He has said and how you can obey Him. He invites you to ask Him for His divine power to make you more like His Son, the King of kings and Prince of Peace, whose life, death and resurrection is of "first importance" (1 Corinthians 15:3).