The Weight of Glory 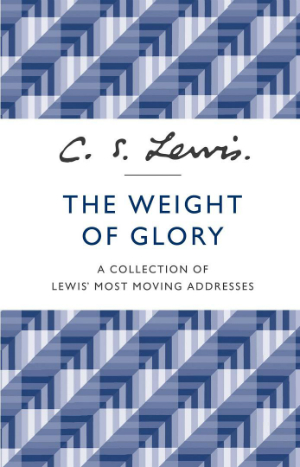 Here are some of the quotes I particularly liked from a collection of lectures by C.S. Lewis, The Weight of Glory (2013 edition published by William Collins):

If there lurks in most modern minds the notion that to desire our own good and earnestly to hope for the enjoyment of it is a bad thing, I submit that this notion has crept in from Kant and the Stoics and is no part of the Christian faith. Indeed, if we consider the unblushing promises of reward and the staggering nature of the rewards promised in the Gospels, it would seem that Our Lord finds our desires not too strong, but too weak. We are half-hearted creatures, fooling about with drink and sex and ambition when infinite joy is offered to us, like an ignorant child who wants to go on making mud pies in a slum because he cannot imagine what is meant by the offer of a holiday at the sea. We are far too easily pleased. (p.26)

To please God… to be a real ingredient in the divine happiness… to be loved by God, not merely pitied, but delighted in as an artist delights in his work or a father in his on – it seems impossible, a weight or burden of glory which our thoughts can hardly sustain. But so it is. (39)

The load, or weight, or burden of my neighbour’s glory should be laid on my back, a load so heavy that only humility can carry it, and the backs of the proud will be broken. It is a serious thing to live in a society of possible gods and goddesses, to remember that the dullest and most uninteresting person you can talk to may one day be a creature which, if you saw it now, you would be strongly tempted to worship, or else a horror and a corruption such as you now meet, if at all, only in a nightmare. All day long we are, in some degree, helping each other to one or other of these destinations. It is in the light of these overwhelming possibilities, it is with the awe and the circumspection proper to them, that we should conduct all our dealings with one another, all friendships, all loves, all play, all politics. There are no ordinary people. You have talked to a mere mortal. (45-46)

The work of a Beethoven and the work of a charwoman become spiritual on precisely the same condition, that of being offered to God, of being done humbly “as to the Lord”. (55-56)

I think the best results are obtained by people who work quietly away at limited objectives, such as the abolition of the slave trade, or prison reform, or factory acts, or tuberculosis, not by those who think they can achieve universal justice, or health, or peace. I think the art of life consists in tackling each immediate evil as well as we can. (79)

Believers in progress rightly note that in the world of machines the new model supersedes the old; from this they false infer a similar kind of supercession in such things as virtue and wisdom. (82)

…we shall then be forced to the conclusion that Christ’s true meaning, concealed from those who lived in the same time and spoke the same language, and whom He Himself chose to be His messengers to the world, as well as from all their successors, has at last been discovered in our own time. (87)

‘We know not what we shall be’; but we may be sure we shall be more, not less, than we were on earth. Our natural experiences (sensory, emotional, imaginative) are only like the drawing, like pencilled lines on flat paper. If they vanish in the risen life, they will vanish only as pencil lines vanish from the real landscape, not as candle flame that is put out but as a candle flame which becomes invisible because someone has pulled up the blind, thrown open the shutters, and let in the laze of the risen sun. (111)

I believe in Christianity as I believe the Sun has risen, not only because I see it, but because by it I see everything else. (140)

Real forgiveness means looking steadily at the sin, the sin that is left over without any excuse, after all allowances have been made, and seeing it in all its horror, dirt, meanness, and malice, and nevertheless being wholly reconciled to the man who has done it. That, and only that, is forgiveness, and that we can always have from God if we ask for it. (181)

Failures will be forgiven; it is acquiescence that is fatal, the permitted, regularised presence of an area in ourselves which we still claim for our own. We may never, this side of death, drive the invader out of our territory, but we must be in the Resistance, not in the Vichy government. And this, so far as I can yet see, must be begun again every day. (192)