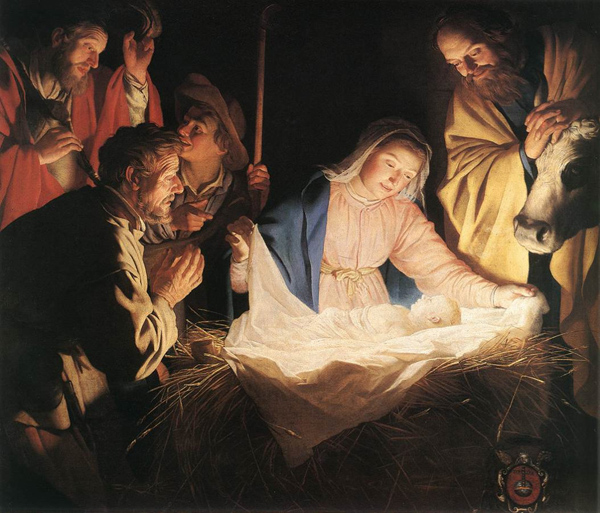 Why so silent? If this was the turning point of history, when God sent His Son to Earth, why was there so little fanfare? People are always telling each other about what they think is important, so why was that first Christmas different?

It was so small and hidden away, hardly anyone noticed. Mary and Joseph would have seemed like just another young couple on the road: maybe you would have noticed her bump, or seen the worry on his face, but then they would have passed by and you’d have forgotten all about them. Bethlehem itself was just another name on the long list of places occupied by the Roman Empire, and nowhere near the top. It was overcrowded with people who all had their own business to be getting on with so very few people noticed yet another baby being born.

Caesar Augustus in Rome heard nothing of it. Nor did Emperor Ping of Han in China. Nor whoever was ruling the forts on Arthur’s Seat and the Crags at the time. Almost no-one heard about the event that changed everything.

Why would God be like this? Why, given all His power and glory, did He come to us in this way?

To understand this, look at the shepherds. They were the only people who got what seems like appropriate advertising of what had happened: a sky-full of angels appeared to them, singing about it.

They were urged to go and see the baby for themselves. I don’t suppose any of us would want to argue with a radiant and mighty angel, let alone disobey an army of them, but the shepherds must have had their doubts: “Us, go and see Him?” They lived on the outskirts of society; they were poor and looked down on. Surely they could never come close of the likes of Him. But they were told something even more astonishing than angels appearing: “He is wrapped in swaddling cloths and lying in a manger.” To those of us familiar with the Christmas story, we immediately think, “Of course He is, that’s what happened to Jesus.” But the shepherds would have been thinking: “Well that’s what happens to every baby born to the likes of us.” Peasants used strips of cloth to keep their new-borns warm: they couldn’t afford silks or fine linens. And they didn’t have the money or the space for a cot, so an animal’s feeding trough – filled with fresh hay or straw – was the best and safest place for them to put their babies. The description they were given told them that the Messiah really had been “born to them”, as the angels said. He wasn’t in a mansion or a palace: He was in their part of town, He was one of them. They could come close to Him.

The shepherds learnt that night what Jesus spent the whole of His life showing: that God had come close to us. So close that He would share our skin, our days, our meals, our paths; our joys and our sorrows.

When He had become an adult and began to preach, people flocked to Jesus, and He let them. Success and fame usually leads to separation from the crowds: VIP access and security barriers - Jesus never lived this way. He refused to listen to those who tried to keep a safe space around Him, repeatedly breaking through it to get close to someone who was desperate for Him. He talked to those no-one else wanted to hear from. Women and children, who were usually kept well away from anything of importance in that culture, received famous welcomes from him. People who were well-known for having messed up their lives always got His attention and involvement. Those who were untouchable called out to Him, and He put His hands on them – possibly the first person to have done so for decades. The only people who couldn’t seem to get really near to Him were those who were happy trusting in themselves.

And what happens when He draws near?

In the Jewish culture He belonged to, there was a strong concept of people being clean or unclean, relating to their social and religious status: clean was good, unclean was bad. This represented the difference between those who were living rightly, and those who weren’t - we still talk about people having a stain on their reputation.

Some people in Jesus’s day believed they could keep themselves clean, many knew that they had made themselves grubby. As well as how you lived, you also became unclean by touching someone or something that was unclean, like a diseased body or a social outcast. So by coming close to desperate and dirty people, Jesus was surely making Himself unclean. In fact, the opposite happened. When He touched someone who was covered in festering sores, rather than their germs infecting Him, His wholeness spread to them. When He ate and talked with people who were scandalous sinners, rather than their bad ways rubbing off on Him, His goodness appeared in their lives. In His own words: “Come to me, all who labour and are heavy laden, and I will give you rest.” (Matthew 11:28)

This is what happens when God comes close. He came close because He loves us and we needed Him to. Only He can come so close, see all our faults and failures, and then remove them as far from us as the east is from the west. Only He can set us free from our past and give us a new future. Only He can make us clean, heal our brokenness, change us from the inside out. He did this for us by living, dying, and being raised to new life on our behalf. Our minds start to struggle at the very suggestion of these things being true, let alone that they could be done - He did them for us.

Today, Jesus is inviting you to come close to Him. Not just to enjoy Christmas traditions and maybe get a distant glimpse of Him through them, but to seek Him out. Jesus came with many things to do, but only one thing to find. That thing is faith: trusting Him, looking to no-one and nothing else for the help we all need, opening your door to Him. He comes close to us first so that we can do this this through hearing and reading about Him.

On a similar theme, here's the King's Church Edinburgh Christmas 2017 video: He Draws Near…