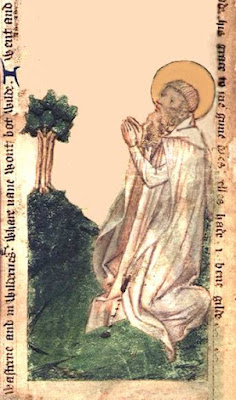 If you’ve ever read even the briefest of hagiographies – a record of a Saint’s life that seems implausibly perfect – and thought how unreal it seems, you will find Godric satisfying and challenging. I enjoyed Godric for this reason and also its pitch-perfect writing style. Sentences are terse but poetic, befitting one of the earliest known Anglo-Saxon lyric poets.

The man Godric lived in England in the Eleventh and Twelfth Centuries, becoming a famed hermit, and all we really know about his life comes from a hagiography by a monk called Reginald of Durham. Buechner imagines their interactions as Godric enters the last days of his life, painfully aware of his sins and desperate that Reginald not portray him as a saint.

Buechner wrote elsewhere that “the most fascinating story anybody can tell, especially anybody who happens to be religiously inclined [is] … How did you get to be the way you are when there are a million reasons for not being that way at all? How did you happen?” Godric wrestles with this question in a world that is violent, unjust, and always open to the miraculous. A person can be covered in filth and yet hear voices from heaven.
Labels: Books Faith Good stuff Reviews