Get bored now (if not here)

To say it was to invite the inevitable but I would say it anyway. “I’m bored.” Tim’s reply would be instant: “Only boring people get bored.” Not wishing to be so labelled, I argued about this with equal inevitability, until we came to a conclusion along the lines of, “Curious people don’t get bored.” A more helpful sentiment, if not a more memorable phrase. 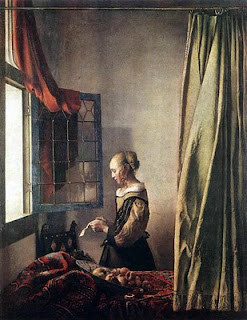 I thought about this when reading Alain de Botton’s review of Boredom: a lively history by Peter Toohey (available behind The Times paywall). De Botton quoted the old adage and showed how Toohey gently savages it with evidence from the arts and sciences. According to psychoanalysis, times when we’re bored are “when valuable pre-conscious is being churned up, ready to rise to the surface and propel us to truly valuable achievements.” We should be warned by the desperation of Flaubert’s Madame Bovary to have an exciting life as this leads to her death. We can be encouraged by Dutch painters such as Vermeer (right), whose subjects are so mundane yet so skilfully rendered that they force us to consider the ordinariness of life and discover magic that we might otherwise miss.

One of the reasons that I joined Twitter with trepidation was my awareness that I was giving my mind yet another escape route from itself during periods of silence. I've worried about this before. Despite what some might say, and the novelty of some of the escape routes, this is not a new phenomenon. The old always think the young move too fast and think too little but they're probably always at least partly right.

Toohey’s solution to the fear of boredom seems to be the same as that which Tim and I came to, though I’m sure he puts it better. De Botton’s conclusion is that, “The achievement of proper maturity is to be more and more interested by more and more things, because a place is made for them in the imagination.” If we take the opportunity afforded by boredom to think and ask questions, and have teachers who can show us the applicability of their subject to our lives, the world is an infinitely interesting place. Presumably we become more interesting people as result, though not necessarily...